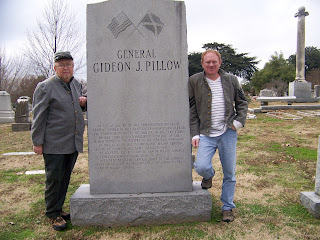 Me and James "Beasley" Howard at the grave of General Pillow

About two months ago, Jerry and I decided to go on another Civil Wargasm. We thought it would be fun to ask two of our buddies along, James Howard and Lanny Perry. Unfortunately, Lanny's wife wouldn't let him miss any work, but James was game. We planned to head to Memphis and hit Elmwood Cemetery and then travel to the grave of Jerry's hero, Nathan Bedford Forrest.
The trip got off to a slow start when James (who happens to be 49 years old) couldn't seem to get away from his mom. They stood on the front porch (I didn't want to be nosy so I never looked to see if they were hugging or not) for several minutes. I was beginning to wonder about James. Perhaps his mother had been told some bad things about Jerry and myself. I immediately decided that it had to be Jerry who she thought was the bad influence and my mind was put to ease. 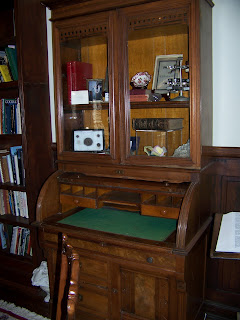 The three of us left for Memphis and discussed my favorite subject the entire way, the war of course. We soon arrived in Elmwood and entered the office to find a map. Inside the office was the desk (the actual word is secretariat) that belonged to Confederate Brigadier General Alfred Jefferson Vaughan who is also buried in Elmwood.
We purchased a map showing the burial places of all prominent people buried in Elmwood. There are eleven Confederate general's buried there not to mention some militia general's and two Federal general's. We left the office and struck out for the nearest grave. We found the grave of Major General James Patton Anderson first. Not wanting anything to be unusual about this trip, I managed to attract a wierdo. The fellow gave us a brief lesson on General Anderson and mentioned the general was buried in the poor section of the cemetery. He told us he just couldn't grasp why a major general would be buried among the poor. I explained to him the general was in financial trouble after the war as most Southerner's were. The man looked at me with a confused look on his face and said, "I just can't imagine why he is buried over here." Oh, well, I tried. 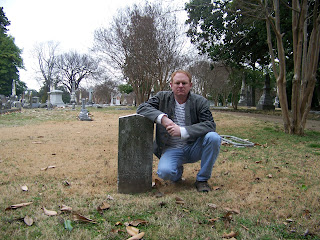 Me with Brigadier General Preston Smith

We found all the generals, although we were followed and greatly distracted by my wierdo. We were regaled with tales from one end of the planet to the other and time began to become a factor. I got a picture of myself at the grave of one of my hero's, General Preston Smith who was killed at Chickamauga after riding forward in the darkness to locate the Federal main line. Among the other generals we found in Elmwood were Elkanah Greer, Alfred Jefferson Vaughan, Gideon Pillow, William Humes, Lucius Marshall Walker, James Chalmers, William H. Carroll, George W. Gordon, Robert V. Richardson, and William M. Gardner.
Before leaving the cemetery, Jerry found a dog monument with an actual flea collar around its neck. Obviously, Jerry thought this was a waste and James and I had to talk him out of taking the collar home to use on his Dachshund named Pumpkin. James did learn that when you don't have a door covering your memory card on your camera and you swing it around like a mad man, your apt to lose the card. (By the way, if anyone comes across a memory card in the Forrest family section of Elmwood, please contact James Beasley). 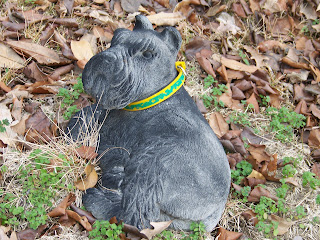 The best part of the trip was saved for last. We headed down town to Forrest Park where the "Wizard of the Saddle" himself is buried. The fearless commander who struck fear in the hearts of all Federal troops including Grant himself, happens to be Jerry's hero of hero's. I thought we would arrive to see Jerry well up in tears, rushing from the car to the giant monument, but Jerry never fails to surprise me. 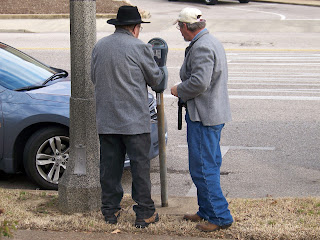 Instead, he and James spent the next fifteen minutes trying to figure out how to operate the parking meter. I decided to press on to the monument alone while they beat, banged and twisted the meter mercilessly. They finally arrived at the huge monument (I'm still not certain who won, but I'm putting my money on the meter). As we walked around the monument in awe of the great man, I continued to check Jerry's eyes for moisture. Jerry was not to be outdone. He understood that if he shed one single tear I would never let him forget it. I walked over to Jerry and asked, "What do you think?" He replied simply, "That stud horse is anatomically correct. Just look at that thing." What could I say? Just another typical Civil Wargasm with Jerry. 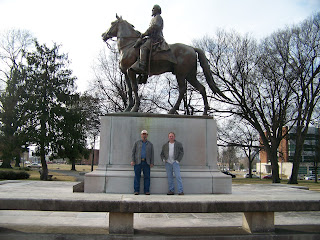 Jerry and me in front of Forrest's grave 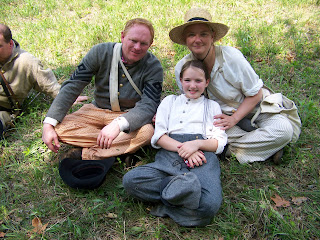 Tim, me and Carlee taking a break

On Thursday afternoon of the re-enactment the confederate army marched out of camp to do a little fighting and try to experience a little of what the soldiers did way back when, including sleeping on the ground all night.  It was extremely hot this afternoon and I thought I was going to be seriously ill for a few minutes but I forgot all about it when we started firing on the Yankees.  There is nothing like holding an original 1855 Harpers Ferry in your hands and actually getting to shoot it.  (Still can't believe Tim lets me use this!) We did this off and on for a couple of hours with a few breaks in between.  Then our fearless leaders lead us to the campsite for the night.  In my mind I had imagined  we would be lying in a field under the beautiful dark night with the stars scattered above us.  Wrong!  I was jerked from my fantasy when we were told to go up into the tree line of the woods behind us and pick a spot.  The woods?  You have got to be kidding!  Ticks, spiders and chiggers! Oh my!  Luckily Tim's best friend Jerry was with us and we stayed together and whatever scent Jerry had on attracted all the ticks from our vicinity. 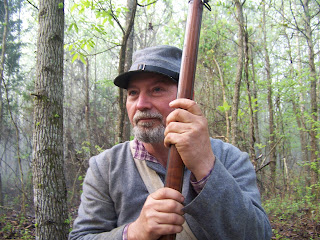 
Darkness began to fall and we were all lazing on our blanket rolls talking when all of a sudden Tim Kent and Jerry Smith started doing what they do best.  Storytelling.  They told stories about aunts turning into mules, small killer spiders, boiling cats, and who knows what else.  All I know is after a few hours of this I was begging them to stop because my sides were hurting so bad.  Not to mention our fellow soldiers scattered around us.  Needless to say they kept us entertained.

After things had calmed down a bit we started hearing rumors about a night fight.  Sure enough here comes the word to get up and go.  So we jumped up, put on our gear and marched as silently as we could through the night.  Unfortunately we didn't get very close but did get to shoot a few times.


The one good thing about it was I was finally worn out enough to actually get a little sleep.  Waking only when some part of my body that was on the ground either went to sleep or started hurting really bad. 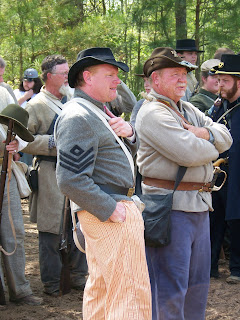 Tim and Captain Hunter waiting on the word to go in


I know it's not even close to what the soldiers went through 150 years ago but I can say those poor guys had it rough.  I definitely have a renewed respect for these brave men.
Posted by Tim Kent at 10:36 AM No comments: