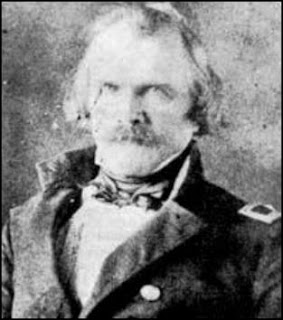 Albert Sidney Johnston
There is a mild controversy among historians as to who actually killed Albert Sidney Johnston at Shiloh. The Kentucky born general had adopted Texas as his home state and because of his friendship with Jefferson Davis was made the highest ranking field general in the Confederate Army. Davis had once said, "If Johnston is not a general, then we have no general."
What is known about Johnston's death is that he led a charge against the Peach Orchard sector of the battlefield. He was struck in the back of the knee, the bullet slicing his popliteal artery and he bled to death on the field. There is more to the story, however. 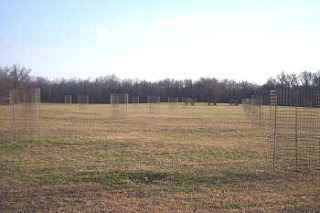 Johnston led his men from the far tree line
On February 7, 1837, Johnston fought a duel with Texas General Felix Huston. He was struck in the hip by a pistol ball. The wound damaged a nerve in Johnston's right leg and he lost a good bit of sensation as a result. When he was struck by the bullet at Shiloh, he had no idea that he'd been wounded.

Popliteal Artery located behind the knee
Johnston wore high riding boots and the blood poured into his boot and as a result was unnoticed by members of his staff. It wasn't until moments later that he was observed under a tree slumping in the saddle. His staff took him off his horse and carried him into a nearby ravine and searched for the wound. When they removed his boot, they found it filled with blood. Ironically, Johnston carried a tourniquet with him, but none of his staff understood how to use it. Johnston soon lapsed into unconsciousness and died. 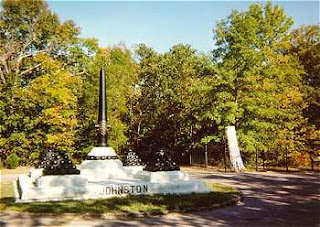 Site where Johnston was noticed to be wounded 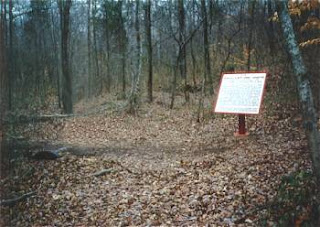 Ravine where Johnston died
The story gets even murkier at this point. A surgeon dug the bullet out of the back of Johnston's leg and announced that it was an Enfield bullet. Federal soldiers in that section of the battlefield weren't carrying Enfield's. The Confederate soldiers that Johnston was leading in the charge were carrying Enfield Rifles. That would mean in all probability that Johnston was shot by his own men by accident.
One account states that Johnston, Harris and Breckinridge placed themselves about forty paces in front of the line of about 5,000 men and led the charge. It was the highest ranking charge in American history. Johnston was the ranking field general in the Confederate Army, Breckinridge was the ex-vice president of the United States, and Harris was the current governor of Tennessee. As a side note, the Confederate governor of Kentucky George Johnson was killed at Shiloh on another part of the field while serving as a volunteer private on line with men from his state. 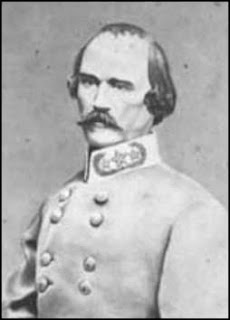 Albert Sidney Johnston in C.S. Uniform
It can be argued that Johnston was hit in the back of the knee by a Confederate bullet during the charge. It could also be argued that his surgeon misidentified the bullet. One could also argue that Johnston was killed by Felix Huston in the duel 25 years before that fateful day. Had he not had the nerve damage in his leg, he would have felt the wound when it occurred. Regardless, Sidney Johnston remains one of the great what-ifs of the war. I plan on doing another blog on his generalship in the future.
It is a strong possibility that Johnston was the first Confederate general to be shot by his own men, but he certainly would not be the last. Stonewall Jackson (Chancellorsville), Micah Jenkins (The Wilderness) and James Longstreet (The Wilderness, but survived) would be other Confederate's hit by friendly fire.
Posted by Tim Kent at 12:16 PM