Major General G.W. Smith: Was the strain more than he could bear?

Major General G.W. Smith: Was the strain more than he could bear? 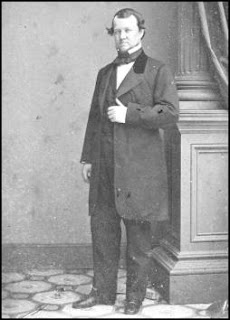 One of the lesser known Confederate generals who could have played a larger role was Major General Gustavus Woodson Smith. He was born in Kentucky in 1821 and was a cousin of Confederate General John Bell Hood. Ten years older than his cousin, Smith graduated from West Point in 1842 and opposite his famous cousin, Smith graduated high in his class. Finishing high in his class meant he was able to enter the engineer corps.
He saw action in the Mexican War and was breveted for gallantry three times. Smith then returned to West Point where he taught. In 1854 a year after his cousin John Bell Hood's graduation, Smith resigned and began a career in civil engineering. He was working in New York City as street commissioner when the Civil War began. He was delayed in coming South and joining the Confederacy until September, 1861 because of having suffered from a stroke that caused temporary paralysis.
Upon enlisting in the Confederate Army, Jefferson Davis immediately commissioned him a major general. He was sent straight to the army in Virginia as a division commander under Joseph E. Johnston. Smith soon thereafter became an ardent follower of Beauregard and helped him in his attempt to gain control of the army over Johnston. 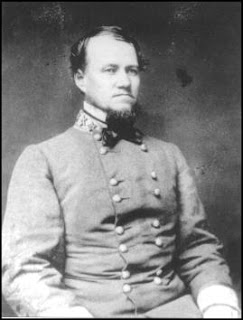 When Davis tired of Beauregard and sent him to the western army, G.W. Smith became second in command of the Virginia army. His responsibility also began to grow. Johnston placed him in command of one wing of the army. When the army moved to the Peninsula to face McClellan's advancing army, Smith began to have strange medical conditions. His field performance was also poor.
An aide of President Davis actually called Smith's condition one of moral cowardice. Not a fear for safety, but a fear of failure. This may be partially true, but was there more to the situation than just fear of failure. Was the mental strain of commanding large bodies of troops to much for him. Perhaps there was just too much responsibility for him to handle, especially for a man who has suffered from a stroke at such a young age. He was only forty when the war began.
The great reputation that Smith had obtained when the war began was about to go spiraling downward. Davis had thought so much of the man, that he'd promoted him to third in rank in the Army of Northern Virginia the day he'd joined the Confederacy.
That fall from glory occurred on May 31, 1862 when General Joseph E. Johnston was wounded at the Battle of Seven Pines. Command of the army passed to Smith. Davis arrived at his headquarters the next morning to learn of his plans and found his general partially paralyzed again and unable to “endure the mental excitement.” By the next day, he would be forced to leave the army entirely because of his condition. Davis placed Robert E. Lee in charge of the Virginia army and we all know how well that worked out.
Smith was taken to Richmond where his condition seemed to worsen. In July he said, “I do not get straight in brains and nerves as fast as I hoped.” Smith would serve at various posts in the army throughout the war, but never again would he be given an important assignment.
Following the war, he would return to civil engineering and begin a long bitter feud with Davis and Johnston. He would die in 1896 of a heart condition and rests today in Cedar Grove Cemetery, New London, Connecticut.


Historian William C. Davis believes Smith's failure came from too much pride and ego. He believes that Smith had earned too high a reputation without earning it and when forced to perform had become sick. This of course is possible. It is also possible Smith suffered from a nervous breakdown from the strain. Especially one who has suffered from a stroke the previous year, working under constant responsibility, it may just be that simple. We may never know for sure.
Posted by Tim Kent at 7:03 PM