Skeletons of the Civil War by Debra Glass and Heath Mathews 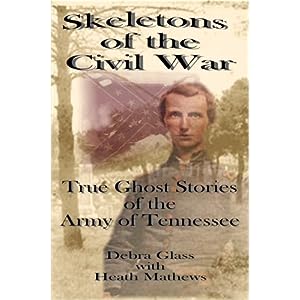 
Last month, I had the opportunity to sit beside Debra Glass and Heath Mathews and sell books at the worlds largest Civil War show in Nashville, Tennessee. It was the first time I had met Heath in person. I'd talked to him on the phone a few times. Heath turned out to be a great guy. It didn't take me long to learn that Heath is the type person who is committed to saving as much of our historic battle grounds as possible. Sometimes, he feels like he's fighting a losing battle.
After the show on Sunday, we took the grand tour of Franklin and had a blast. I finally visited the graves of the Carter family and witnessed the spot where Hardin Figures, the fifteen year old boy, climbed a tree and watched the battle. He also showed where the house stood where Brigadier General States Rights Gist had died. Debra doesn't like General Gist very much because he came out so violently against Cleburne's proclamation to free the slaves and make soldiers out of them. While that is true of the man, he was fine commander and probably deserved a shot at division command. Besides, you have to love his name.
Heath and I then walked the ground where my ancestor Private Mack Keenum charged the osage orange abatis on the far right under General Thomas Moore Scott. We located what we think is the approximate position of General Adams death. Walked behind the Franklin Chamber of Commerce and found the position where a sign once stood marking the death site of General Strahl.
We passed through Franklin again a couple of weeks ago and again looked Heath up. Again, we did some more touring of the field of Franklin. I may be working with my publisher soon to do a documentary on the affair at Spring Hill and plan on asking Heath for help. If you haven't read the book Skeletons of the Civil War, you need to buy a copy soon. Even if your not into ghost stories, there is a lot of history in the book.