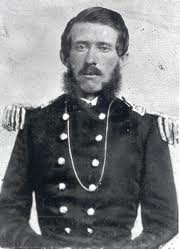 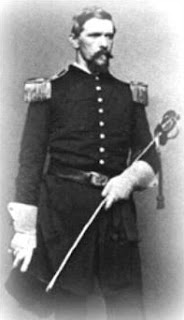 Federal Brigadier General William R. Terrill
Two more brothers who served as general's during the Civil War on opposite sides were James and William Terrill. Unlike the McIntosh brothers, both of the Terrill brothers would die fighting during the war. William was born in 1834 and obtained an appointment to the United States Military Academy. He would rise to the rank of brigadier general and be mortally wounded by artillery fire at the Battle of Perryville. His younger brother James was born in 1838 and attended the Virginia Military Institute. Unlike William, he didn't make the military his career, but instead became an attorney. When the war began, James and another brother named Phillip joined the Confederate army. Phillip was a private and was killed at the Battle of Cedar Creek. James who rose to the rank of brigadier general was killed at Bethesda Church by a Federal sharpshooter. He was buried by the Federals on the field and his grave has been lost to history.
After the war, their father erected a monument to the memory of the Terrill brothers which read, 'This monument erected by their father. God alone knows which was right.' 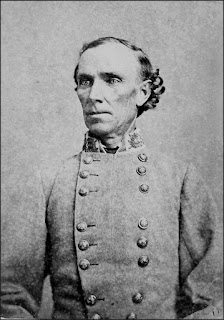 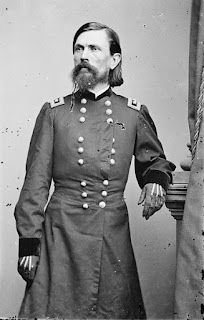 Federal Major General Thomas L. Crittenden
George Crittenden was born in 1812 and his younger brother Thomas was born in 1819. George graduated from the United States Military Academy and became a career soldier. He saw action in the Black Hawk War and Mexican War. The Crittenden family were close friends with the Davis family, both from Kentucky. George decided to join the Confederate army under his close friend Jefferson Davis. He commanded the troops at Mill Springs during the defeat there. Rumors soon circulated that he had been intoxicated while on duty. A courts-martial was convened and Crittenden was cashiered from the army. Thomas became a lawyer and joined the army to fight during the Mexican War. He rejoined the army when the Civil War began and rose to the rank of major general before resigning in 1864. 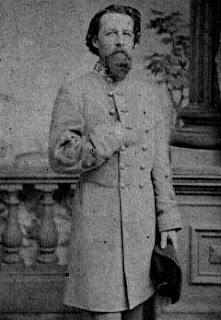 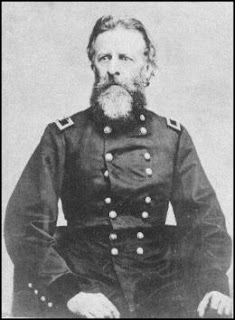 Federal Brigadier General Phillip St. George Cooke
In an even rarer incident, there were a pair of general's who fought on opposite sides who were father against son. Virginia born Federal cavalry commander Phillip Cooke remained loyal to the Union when the Civil War began. His Harvard educated son John Rogers Cooke would resign his commission and enter the Confederate army. John's sister Flora Cooke had married a Virginian named James Ewell Brown Stuart, otherwise known as Jeb. When the war began Stuart would see action on the Peninsula in Virginia against his father-in-law Phillip. Stuart once said that his father-in-law would regret his decision for fighting against his home state but once and that would be eternally.
Bother Cooke's would survive the war, but Stuart would be mortally wounded at Yellow Tavern in 1864. The senior Cooke would outlive his son by four years dying in 1895. These are just a few of the many close relatives in the officer ranks during the war. There were many cousins who fought against each other in that war also. Abraham Buford and John Buford, both served in the cavalry service. Robert E. Lee's second cousin was Samuel P. Lee who was a rear admiral in the United States Navy and in charge of the North Atlantic Blockading Squadron.  There were probably few families who weren't affected by relatives fighting relatives during the Civil War.
Posted by Tim Kent at 8:06 PM 2 comments: 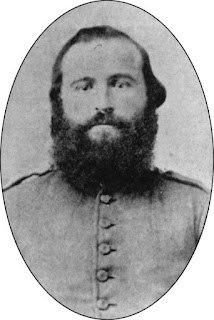 Confederate Brigadier General James M. McIntosh
Most everyone has heard stories about the Civil War being a war where brothers often fought one another. Few realize that this also occurred among the generals who fought. James McQueen McIntosh was born in 1828 in Florida while his father was stationed there in the U.S. Army. A year later, while still at that post James little brother John Baillie McIntosh would be born. Their father would be killed during the Mexican War.
James would miss the Mexican War while attending West Point. There he proved to be a very poor student. He cared very little for the classroom and like fellow Confederate General George Pickett, he would finish dead last in his class. His brother John wouldn't attend West Point, but served in the Navy as a midshipman during the Mexican War. 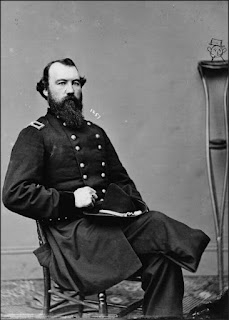 Union Brigadier General John B. McIntosh
When the Civil War began, James resigned his commission and became colonel of the Second Arkansas Mounted Rifles. He saw action at Wilson's Creek where he proved to be a daring cavalry commander. He was famous for his fearlessness in battle and his colorful language. Leading his men in desperate charges would prove his undoing.
He would receive a promotion to brigadier general for his actions in routing a numerically superior force. His first major battle following that promotion would prove to be his last. At the Battle of Pea Ridge after seeing his friend and commander Benjamin McCulloch killed. He charged forward in an attempt to recover the mans body and be shot through the heart. They would carry the high-strung officer back to the National Cemetery in Fort Smith, Arkansas where he rests today. James McIntosh was either 33 or 34 years old. His exact birth date has been lost to history. 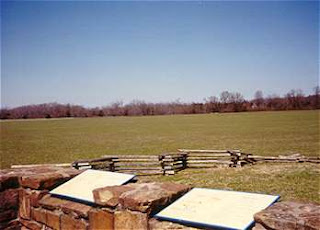 McCulloch and McIntosh were both killed in the treeline across the field
When the war began, James's brother John was working in business in New Jersey. Like James, John would spend the war serving in the cavalry. He was with McClellan's army during the Seven Days. He served well during the  Battle of Chancellorsville. He led an attack against J.E.B. Stuart's cavalry at Gettysburg. His next action would be over a year later at the Battle of Winchester where he would lose a leg.
Following the war, John would return to New Jersey and die there in 1888 at the age of 59. He is buried in Elmwood Cemetery, New Brunswick, New Jersey. It makes you wonder how two brothers so close in age could ever consider fighting a war on opposite sides. 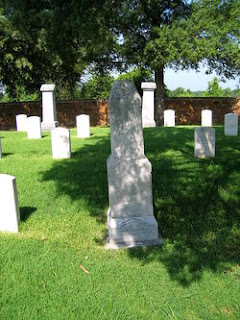 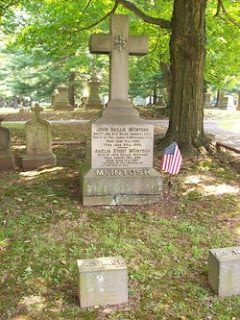 John's grave in New Jersey
Posted by Tim Kent at 4:23 AM No comments: 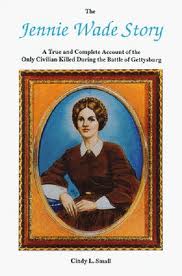 The Jennie Wade Story by Cindy L. Small claims to be a true account of the only civilian killed during the Battle of Gettysburg.  Although attempts were made to smear her reputation by the famous John Burns,Cindy Small manages to dig up all known evidence and set the record straight.  When you finish this book you will understand that Jennie Wade was indeed baking bread for Union soldiers when she was killed.  Contrary to the way John Burns described Jennie Wade as a lady of loose character.  In truth John Burns attempted to smear Jennie's reputation because he despised having to share his fame with anyone else. 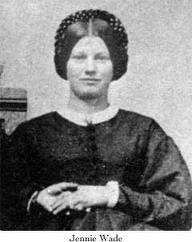 Although the book is only 71 pages long Mrs. Small does an excellent job covering everything that is known about Jennie's life.  She stops just short of a forensic investigation, describing where the bullet was thought to have come from and the path the bullet took as it struck her in the back after passing through two doors.  The bullet was ranging upwards, passed through her heart and spent its force stopping inside her corset.  All eyewitness accounts claim that Jennie died making bread for union soldiers.  Cindy Small says that Jennie was buried with the dough still on her hands. 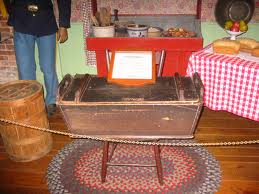 Actual dough tray Jennie was using
Cindy Small goes into the details of Jennie's fiance Jack Skelly, the message he gave to Wesley Culp when he was mortally wounded in Virginia.  Wesley Culp went to school with Jennie and Jack, born and raised in Gettysburg, he had moved to Virginia prior to the war and remained loyal to the South.  Wesley would be killed on his cousins farm before he could deliver any message.  The amazing part of this story is that none of the three childhood friends knew the fate of their classmates.  Cindy Small's book lists for less than six dollars but it is worth every penny.
Posted by Tim Kent at 8:19 PM No comments: