The Truth About Confederate Massacres 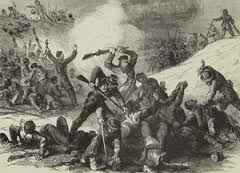 In my last blog I discussed the Northern myth of the white supremacist Southerners. Now, I'd like to discuss the misleading stories of Confederate massacres on black Federal troops. The most famous of all would be the Fort Pillow massacre. Saying there weren't atrocities committed at Fort Pillow would be an outright lie and I'm not going to lie. The truth is there were some pretty depraved acts committed there.
I've heard every excuse in the world given for why unarmed men were shot down. The most famous excuse was because the flag was never lowered. It is true the flag was never lowered. The fort being overran so suddenly, there probably wasn't enough time to lower the flag and raise a white banner of surrender. While we know there were atrocious acts committed by Confederate troops at Fort Pillow, we hardly ever hear the rest of the story.
Prior to the assault at the fort, Federal troops had captured seven of Forrest's subordinates and killed them. Lieutenant Willis Dodd had been captured by Colonel Fielding Hurst of the 6th Tennessee (U.S.) Cavalry and had been tortured to death. Dodd's face had been skinned, his nose cut off, his under jaw disjointed, his private parts cut off, among other depredations to his body. Forrest's men were furious at the conduct of the Tennessee (U.S.) troops who were using the war as an excuse to plunder the property of Confederate soldiers.
Also, never told in the story of Fort Pillow are the whiskey barrels. The Federal officers in charge of the fort believed black soldiers were inferior to white soldiers. They had barrels of whiskey placed around the fort believing the black soldiers would need liquid courage to fight. During the truce, there were many witnesses to the conduct of the intoxicated black soldiers toward the waiting Confederate cavalrymen outside the fort. By the time the truce ended and the assault began, the Confederate's were furious from the taunting. As Shelby Foote once mentioned, the Confederate's had to fight their way into the fort, losing good men in the process and as soon as they breached the walls, the black troops threw down their weapons to surrender. Someone in the Confederate ranks basically said, "The hell you surrender, you had your chance." 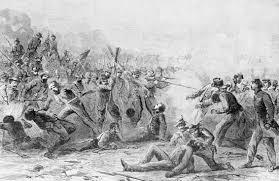 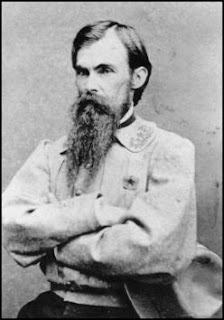 As soon as the explosion blew a hole in Confederate Major General Bushrod Rust Johnson's lines, Lee called up Major General Mahone's division as reserves to fill the gap. General Mahone arrived to find General Johnson busy eating breakfast and seemingly uninterested in repairing the breach in his line. Mahone turned away disgusted and led his men toward the crater. He received word from numerous retreating troops saying they had witnessed unarmed Confederate soldiers shot down after having surrendered. The United State Colored Troops had shouted "No Quarter!" upon entering Confederate lines. Mahone halted his division and informed his troops that Union black soldiers were not giving quarter and he didn't expect his men to give quarter. Thus, led forward by their general, the arrived on the scene to give the black troops the same treatment they were dishing out. Today, over a century later, we only hear about the black troops who were gunned down by the evil Southerners for no reason at the Battle of the Crater. 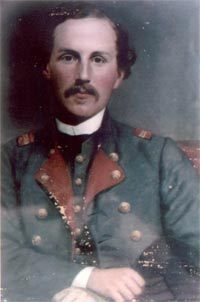 In the last blog about minorities serving in the Confederate Army, I mentioned Jewish Lieutenant Joshua Lazaras Moses. He commanded an artillery battery from South Carolina. At the end of the war he was sent to Fort Blakely on the east side of Mobile Bay.
After the Federal troops overran the small Confederate force at Blakely, Lieutenant Moses and his men were quickly surrounded. The Confederate troops surrendered, but the United States Colored Troops refused to give quarter. They opened fire on Joshua Moses's men. Lieutenant Moses shouted, "For God's sake, spare my men, they have surrendered!"
As white Federal officers commanding the black troops attempted to stop the slaughter, Lieutenant Moses and two white Federal officers were gunned down by the Union Colored Troops. Confederate officers complained of the actions of the Federal troops at Blakely and argued that some of the white commanding officers had encouraged the black troops to show no quarter. The date was April 9, 1865, the war basically over, there being no Confederate government to demand a response from the U.S. government. The incident is one of the fewest talked about massacres of the war.
I haven't written this blog to make the North appear evil and the South innocent. I know there were massacres by both sides. I wrote this blog to show how only one side is portrayed on television and by Northern historians. I don't mind the telling of history as it was, but if someone considers themselves a true historian, they will tell both sides without bias. This is all the people of the South have ever asked for.
Posted by Tim Kent at 10:58 PM 5 comments:

I've been reading online lately about the ongoing argument both for and against the theory that there were black Confederate soldiers. Sons of Confederate Veterans members argue that there were up to 90,000 black soldiers that fought for the Confederacy. I've also read many Northerners say there were no black soldiers fighting for the South. The argument goes on and on, both sides refusing to concede an inch. There is a reason for this argument and hopefully I can shed some light on which side is correct.
Now, if the Northerner agreed that some blacks fought for the Confederacy, it would destroy their entire argument that the war was only about slavery and the white supremacist Southerners desire to oppress another race of humans. The figure of 90,000 soldiers fighting for the South seems a bit high, if you consider being in actual combat with a gun is the only qualification of a soldier. There were numerous black men attached to Confederate armies as cooks, body servants, and even guards and pickets. Most of these men weren't armed, but the guards and pickets were. While Northerners argue that cooks are not soldiers, I used to work with a man that was a cook in the U.S. Army during the Vietnam war. He is a veteran, gets veterans benefits, but by the Northern way of thinking, he isn't a soldier.
In the above photograph you will find an armed black man dressed in a Confederate uniform. How much closer could he get to being a Confederate soldier. I've heard the argument made that because there are no muster rolls for black Confederate's means they weren't really soldiers. If you are in combat, firing a weapon, and someone is firing a weapon at you, then you are a soldier. Does a bullet care if you've been placed on a muster roll?

Another interesting fact that you will notice in all of the photographs of black troops in the Civil War is which side is actually segregated. There are numerous accounts of black men going into combat with white soldiers in Confederate units. You never see a Union regiment with white and black men. Union regiments had white officers, but that was because of the Northern belief that black men weren't intelligent enough to become officers. Accounts of black men going into battle with white men in the South are common. Segregation didn't occur in the South until after the war when Northern politicians began to use black men to retain their political superiority over the country.

There is another argument that the Northern people use to justify there being any black Confederates and that is the belief that black men who fought for the South were being forced to do so against their will. I find this idea preposterous. I can only ask, "Were these men also forced to attend Confederate Reunions following the war?"

There's a lot more false beliefs about the War for Southern Independence. The idea that Southerners are all racists and white supremacists. I'll give you a few examples of some of those evil Southerners that fought to mistreat minorities.

There were members of five tribes that fought for the Confederacy. They were the Cherokee, Chickasaw, Choctaw, Creek, and Seminole. The Cherokee even had a Confederate general. Brigadier General Stand Watie was born in Georgia in 1806 and signed the treaty moving the Cherokee's to Oklahoma. Less than 10% of Cherokee's owned slaves, so the theory of them fighting for slavery is pretty much eliminated from the argument. General Watie is famous for being the last Confederate general to surrender. 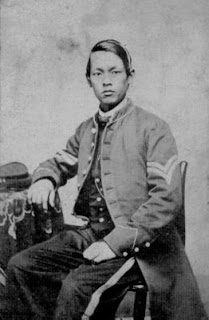 Colonel Ambrosio Jose' Gonzales was born in Cuba who moved to the U.S. in 1849 and served as Chief of Artillery for the Department of South Carolina, Georgia, and Florida 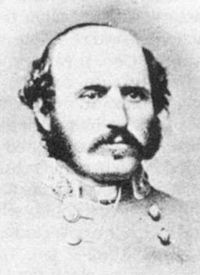 Below are listed examples of black Confederate troops in action

"Officers of the 16th Virginia Infantry posted a young Black male named Ben to guard its surplus rations. When a white private approached and ignored commands to desist, the Afro-Virginian sentry fractured the man's skull with his rifle butt, mortally wounding him. Only after the intervention of General William Mahone himself prevented Ben from being lynched by the dead soldier's comrades. The service of Ben and other black Virginians influenced the 1928 amendment which awarded state pensions to Black males who served on military details or performed guard duty on behalf of the Confederacy."

Written by a member of the 16th Virginia Infantry

"Passing through the yard of a nice farmhouse, we captured some of the Federal outposts, who pleaded for mercy. General (St. John) Liddell swore at them, telling them they were fine fellows, invading our country and then asking pardon. Old Jake (a black man), the bugler, whacked one of them over the head with his saber, saying with an oath: 'You oust get home, den.'"

"Dan Robertson led Company B, 35th Alabama Infantry into all battles while playing his fife. It is said his fife was a bit shrill. He was fearless and owned by the LaGrange Military Institute. He survived the war and was treated as an equal at all Company reunions."

From the History of LaGrange College

"At Greensport, Alabama, he (Brigadier General Alfred Holt Clanton) was outnumbered six to one by Federal troops, but the brave man decided to attack at dawn. He charged around the bend, personally leading his 200 troops. Pistol in hand and charging on foot. He was only twenty paces away when the Federals opened fire, armed with Spencer repeating rifles. His clothes were riddled with bullets, his entire staff killed or wounded.
During the fighting, a large black soldier named Griffin, a member of his command approached General Clanton and asked, "General, where is Marse Batt."
Clanton was as calm as could be, pointed toward the Federal line and said, "There he is dead."
Griffin charged forward, amid cries to stay back, through the smoke and bullets and picked up the young soldier and returned with him in his arms.
"Is he dead?" Clanton asked.
"I don't know, Sir," he replied, "my Mammy was his nurse and I'm older than he is. I promised to take care of him and bring him to her. I'm carrying him home now.'"

See my blog A Knight Without Fear

"The poor whites are as poor as rot, and the rich are very rich. There is no substantial well-to-do middle class. The slaves are, in fact, the middle class here. They are not considered so good, of course, as their masters, but a great deal better than the white trash...The women sport flounces and the men canes...all are slaves."

If you think about it, nothing that I've written or quoted above was taught in school and probably never will be. As Napoleon once said, "History is a group of lies often agreed upon."