Thanks to Mary Carton and Carl with Remember Tuscumbia for all the photos in this blog. 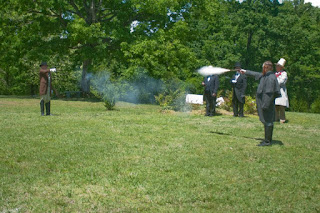 Me on the left dueling my buddy Duane Broyles

This past Saturday I had the honor of performing a duel with James Connings original 1854 dueling pistols made in London and valued today at $250,000. Of course my civilians suit was paid for and Duane's was rented, we knew the outcome ahead of time. I knew I was to die, so I quickly fired each time first so I could get my shot off. I felt like Clint Eastwood, but I always missed my target. Before the past weekend, I had no idea there were so many rules to antebellum dueling. 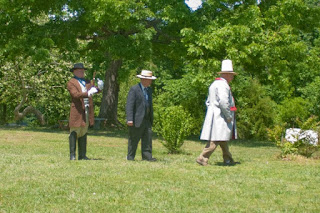 James Mitchell (in the tall hat) of Auburn, Alabama owner of the dueling pistols marking off ten paces

I learned a lot about dueling in the old south. For one thing, it was extremely rare for men to stand back to back and march in the opposite direction. They usually stood and fired from ten paces and it was considered cowardly to turn sideways to present a smaller target. 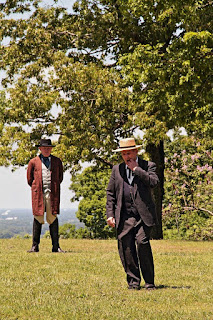 Lanny Perry me second (who knows what he's doing here)

Each duelist had a second and Lanny Perry was my second on this occasion. I have no idea what he was doing at this point, possibly picking his nose. His job is to shoot a duelist that attempts to shoot before the command is given. Mr. Mitchell gave the commands, "Ready, Fire, One, Two, Three, Halt!" It was that quick and that is the reason there were so many misses. If you fired before the word 'fire' or after the command 'halt' one of the second's was to shoot you. 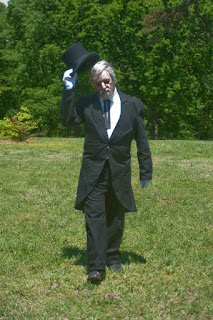 Leland Free is the surgeon, but I accused him of being an undertaker drumming up business

On the field during a duel there were only a certain number of people allowed. The two duelists of course, the two seconds, and a surgeon, and possible two assistant surgeons. Now if you had a problem with a man that was not on your social level, you did not duel him, you caned him with a walking stick. 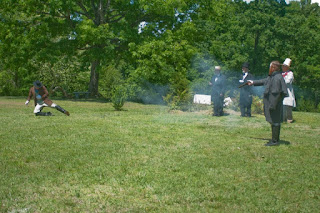 Me taking a bullet in the duel

There were duels long after dueling was outlawed in the South. Mr. Mitchell gave us a talk on dueling that was really great and we learned a lot about dueling. I loved every minute of his talk. 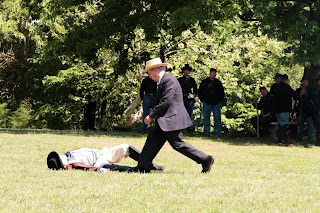 Lanny my second is running to check on me 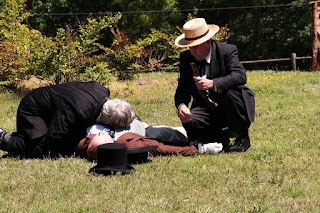 The surgeon confirming the worst 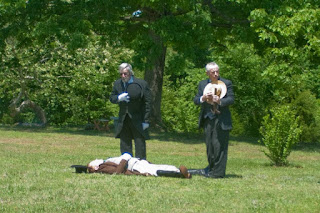 A moment of silence for the dearly departed 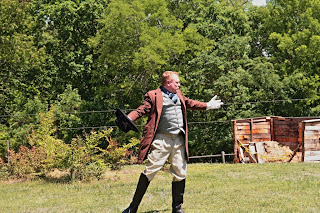 Resurrected from the dead because my last name is Kent, I'm Superman 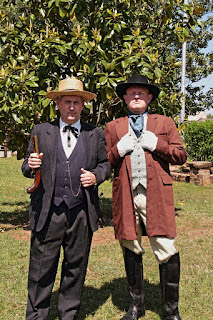 My second Lanny Perry and I posing together

What Was Hood's Plan For Spring Hill?

Historians have argued over what John bell Hood attempted to accomplish when he advanced into the flank of John Schofield's army at Spring Hill. I've argued for years now that Hood was emulating his hero's Robert E. Lee and Stonewall Jackson and trust me I've had my share of being laughed at by Civil War buffs who are convinced Hood was an idiot. Bare with a few moments as I attempt to show through the maps my 11 year old son Chase drew for me Hood's true intentions as I see them. 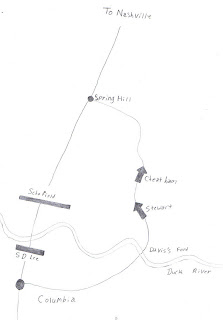 General Hood left two divisions and all the artillery under Lieutenant General S.D. Lee at Columbia to hold Schofield's army in place while he took Cheatham's Corps, A.P. Stewart's Corps and one division of S.D. Lee around Schofield's flank and headed for his rear at Spring Hill. Many historians think Hood planned to race north and take Nashville with these troops leaving Schofield free in his rear. I've always felt this was preposterous. It would almost be insane to march north leaving an army almost as large as your own free in your rear. 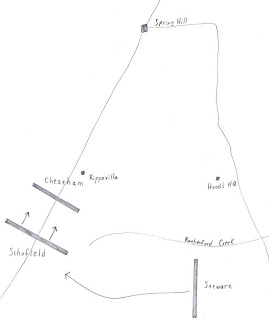 It is well known that Hood ordered Patrick Cleburne and William Bate after crossing Rutherford Creek to move west and form their division across the pike and sweep toward Columbia. As you can see from the map above, Cheatham's corps is facing south across the Columbia Pike, Schofield's escape route to Nashville. A.P. Stewart reported his orders from Hood upon reaching Rutherford Creek, "I reached Rutherford's Creek as Cheatham's division was crossing. I received orders to halt and form on the south side of the creek, my right to rest on or near the creek, so as to move down the creek if necessary." It doesn't take a rocket scientist to realize what Hood had in mind by looking at the map above. A man doesn't deploy an entire division (plus the extra division on loan from S.D. Lee) unless you intend on using them. Why else would Hood have Stewart move his men from march formation into attack formation facing west unless he had plans to move them against Schofield's flank the way Lee would have had Jackson do back in Virginia? Hood called the move the greatest of his career. 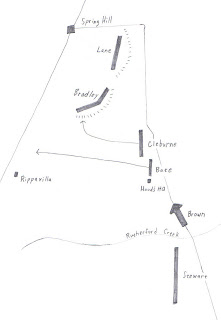 As Cleburne moves toward the pike as ordered by General Hood, he is attacked on his right flank by a single brigade of Federal infantry. He immediately turns to face this threat and begins to drive the Federal's back toward Spring Hill. Bate is ordered to join Cleburne's division on the pike by General Hood and moves that way despite the fighting occurring off to his right. Somewhere in the midst of all these movements, Cheatham (who was not present when Hood ordered Bate to the pike) makes the mistake of believing that Spring Hill is the goal. He will say Spring Hill was Hood's objective for the rest of his life. Upon finding Cleburne facing northwest in the direction of Spring Hill, he threatens to arrest Bate if he doesn't give up the pike and join Cleburne. 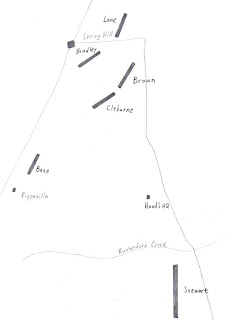 Once Brown places his division on Cleburne's right flank and Bate is being ordered away from the pike to Cleburne's left. At the moment above there are two Confederate divisions facing only two brigades of Federal infantry. Hood who is exhausted is at his headquarters at the Thompson House and doesn't realize that Cheatham is not following Hood's orders. He still has Stewart's entire corps south of Rutherford Creek waiting to crash into Schofield's flank once he retreats and engages Cheatham. Soon Cheatham will arrive and report that his division is not in command of the pike because they have unexpectedly ran into Federal infantry. Hood thinking that Cheatham has attempted to get his division across the pike facing south asks Cheatham if he brings Stewart's corps across the creek and forms them on his right will they be across the pike. Cheatham answers in the affirmative. Many speculate that Cheatham has a dinner date with Mrs. Jessie Peters and wants the fight called off for the night. Some believe the normally aggressive Brown refuses to advance because he has become intoxicated and lost his nerve. 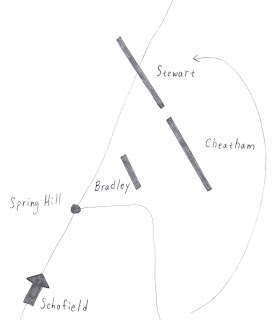 The situation in Hood's mind

Hood then orders Stewart to cross the creek and form on Cheatham's right believing this will place his corps across the pike. Sadly, Stewart isn't across the pike and reports this to Hood. 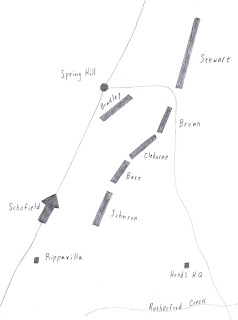 Once Stewart forms on Cheatham's right, his line is still running perpendicular to the pike. The last straw falls when Hood tells Stewart the situation is fine because he has ordered Forrest to cover the pike with what men he has available. The map above shows the great mix up at Spring Hill and results in Schofield's escape.