The Other Roll Tide General

I wrote a blog over a year ago about the Confederacy's Roll Tide General. The story was about Brigadier General John Caldwell Calhoun Sanders who was attending the University of Alabama when the Civil War began. He fought in Lee's Army of Northern Virginia and was killed at the Battle of the Weldon Railroad south of Petersburg.
For some reason I had forgotten about William Henry Forney, who also attended the University of Alabama and graduated there in 1844. Since we are just days away from my favorite team kicking off the football season against the Michigan Wolverines, I thought this would be the perfect time to write a blog about this Crimson Tide Confederate General.
Forney was born in North Carolina in 1823, but moved to Alabama with his family at the ripe old age of eight. He fought in the Mexican War and then returned to Alabama where he practiced law. He also served as a Trustee of the University of Alabama from 1851 until 1860. In 1859 he was elected to the state legislature.
When the war began, he became captain of Company G, 10th Alabama Infantry. His brother John Horace Forney commanded the regiment. William would be shot in the shin at his first engagement at Dranesville. He was wounded and captured at the Battle of Williamsburg, being shot in the right arm near the shoulder, his arm was broken. Following his exchange, he was promoted to colonel of the 10th. His brother Henry had been promoted to brigadier general.
He commanded the regiment at Salem Church, one of the battles in the Chancellorsville Campaign. Again, he was wounded, but only slightly in the leg. At Gettysburg, he led the regiment in the assault on Sickles's line near the Peach Orchard. He was wounded twice, but continued to remain with his men when a third bullet broke his right arm again. Still, he pressed on with his men until a bullet took away his left heel. The wound was severely painful and again, he was left behind and captured by the Federals. 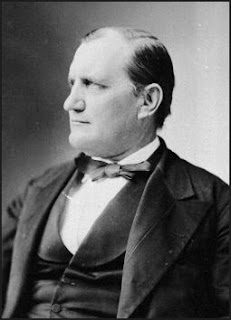 The only know photographs are post-war sittings.

Upon exchange, Forney was promoted to brigadier general and took command of Wilcox's brigade. Wilcox had been promoted to major general and given command of a division. He joined his brigade in the trenches at Petersburg. He served in command of the brigade during the Petersburg campaign and surrendered with his men at Appomattox.
Following the war he returned to practicing law and eventually served in the United States Congress. He died in 1894 and was buried in the City Cemetery, Jacksonville, Alabama. His brother Major General John Forney and Major John Pelham are both buried in this cemetery.
Major General Cadmus Wilcox said Forney was "intelligent, energetic, and gallant in commanding, directing, and leading his men."
General Robert E. Lee said of Forney, "An excellent officer and worthy of promotion," and he is "an officer of intelligence, energy and bravery and of long and faithful service." 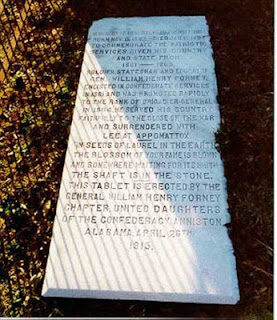 William's brother John was not a Roll Tide General because John who was six years younger than William obtained an appointment to West Point. This also explains why his younger brother was ranked above William throughout the war. I was having a conversation the other day with the Tuscumbia City Historian John McWilliams. He asked me if I knew why southerners loved football so much. I knew he was about to drop something good on me, so I took the bait and asked why. He said "It's because those damned Yankee's can only put eleven men on the field unlike the Civil War. So just five days from kickoff, all I have to say is "Roll Tide" General Forney!

Slavery vs. Tariff: From a neutral standpoint 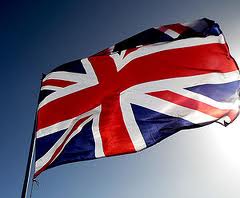 From a famous British authors viewpoint

You can't read a response to any Civil War video on youtube or other websites without reading the continuing arguments about which side was right and which was wrong. Just like in that war, almost all northern people believe the war was fought to free the slaves. Most southerner's believe the war was fought over states rights and the tariff, except for the few who believe everything they've been taught in school. The war was complicated. If it was a war over simple black and white, then we wouldn't be arguing over it today, one-hundred and fifty years after the fact.
It seems to be the same arguments repeated over and over again. I had a discussion with an Arizona State University history professor who was completely sold on slavery being the only reason of the war. He attempted to make fun of any opinion I had regarding the war because he has two more years of college than I do. Regardless of those two years of college, I can guarantee I have studied and read more about the American Civil War at least three times more than he ever will. I did ask him a simple question that he played off completely that actually helps with the argument I am making. I asked if he was born in a New England state. His reply was, "Don't even act like you don't know I'm from New York." Enough said in my opinion.
Mr. "S" insisted that the American Civil War had nothing to do with anything except the northern states being more moral and upright than the evil slave holding states. He doesn't have the intellectual ability to understand that you cannot compare 19th century culture to today's version. This is a mistake made quite often with today's historians or so called historians. They tend to ignore those parts of history that don't fit their perfect world version and insert what they want.
I decided to take a different approach, an approach any true historian should appreciate. I decided to go outside the country and read what a foreigner would think the war was about. Surely, someone neutral and famous would be totally honest with the world over what that war was fought about. I doubt Mr. "S" would want to hear him, but the man did live in that time period, was not from New York, and spoke from a neutral vantage point. 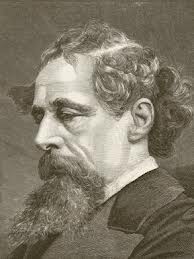 I was recently reading some of British author Charles Dickens letters when I found some very interesting comments made by the man. Dickens was born in 1812 and lived until the year 1870 when he died of a stroke. For those that have never heard of him, he has written several books including A Christmas Carol, Oliver Twist, and A Tale of Two Cities.
You would be surprised what opinions Charles Dickens had about the reason the American Civil War occurred to begin with. In his letters he stated that "slavery has in reality nothing on earth to do with it. The North having gradually got to itself the making of the laws and the settlement of the Tariffs, and having taxed the South most abominably for its own advantage" was basically out of control. What he meant was that once the northern states had more free states than slave states, they passed the most ridiculous taxes on the southern states without the southern states having the ability to defend themselves. What he basically was saying was that the Confederate states were being bullied by the northerners. He went on to say that neither side of the conflict cared a bit for the black race. He understood what Lincoln was saying when he said, “I will say, then, that I am not, nor ever have been, in favor of bringing about in any way the social and political equality of the white and black races—that I am not, nor ever have been, in favor of making voters or jurors of Negroes, nor of qualifying them to hold office, nor to intermarry with white people; and I will say in addition to this, that there is a physical difference between the white and black races which I believe will forever forbid the two races living together on terms of social and political equality. And inasmuch as they cannot so live, while they do remain together there must be the position of superior and inferior, and I, as much as any other man, am in favor of having the superior position assigned to the white race." 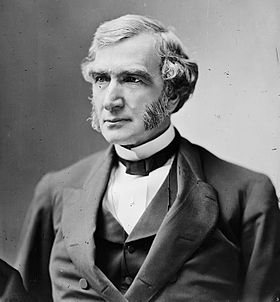 What did Charles Dickens know about slavery and the tariff? We know that the majority of England was against slavery and this prominent citizen seemed to be going against the grain. The question is "why?"
Perhaps the United States helped him come to his decision. With the South still serving in Congress, the Tariff of 1857 was passed and had lowered the tariff to 17% which benefited the South. Once the majority of the southern states had left the union, the northern states were free to pass any tariff they wanted. Thus, we come to the Morrill Tariff of 1861. The passage of this tariff raised the taxes on exports from 17% to 38%. At this date, Mr. "S" still insists the war had nothing to do with money, but the holy north against the evil slave holding south.
He is entitled to his opinion, but is he entitled to force his students to agree to his way of thinking to pass an American Civil War course? I have several questions for Mr. "S," but he would simply turn my questions into some smart joke if I asked him. Here are two of them if I knew he would take me seriously. #1 Was Charles Dickens an idiot for believing the same thing that most southerners do? #2 If the northern states fought the war because they were so humane, why did they go wipe out the American Indians in the 1870's?
Thanks for your input Mr. Charles Dickens, but I'm sure your opinion means as much to the northern historians as it does to some alien from Mars. 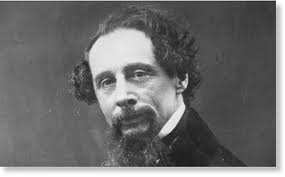