I last posted about the Confederate colonels killed on the first day at the Battle of Gettysburg, here I will give brief bio's on the colonels killed on the second day. Isaac Erwin Avery would be killed at Gettysburg at the rank of colonel, but he was leading a brigade (which was the job for a brigadier general). The reason he was still a colonel is because he was leading Hoke's brigade, that officer having been wounded, would soon return to his command and Avery would revert to his position as commander of the 6th North Carolina Infantry. Avery had been a pre-war planter and part owner of a railroad in North Carolina. He went by the nickname of "Ike" and stood six-foot, four inches in his socks and arrived at Gettysburg at the age of 34. He saw action at First Manassas where he was wounded, Seven Pines, and was wounded again at Gaines Mill. He was back in command for Chancellorsville and took command of the brigade when Robert Hoke was wounded there. During the assault on Cemetery Hill near dark on July 2, 1863, he was shot in the neck and mortally wounded. He was bleeding profusely, his right hand was paralyzed, and he was unable to speak. His aide knelt by his side as he wrote a note with his left hand and using his own blood which read, "Major, tell my father I fell with my face to the enemy." He died sometime that night, either late on July 2 or in the early hours of July 3. He rests today in Rosehill Cemetery in Hagarstown, Maryland. He was considered "true, brave, gallant, and efficient." 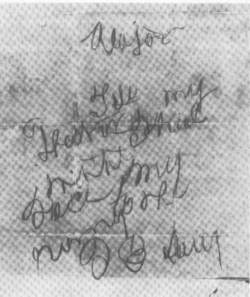 The note written in Avery's own blood to his father 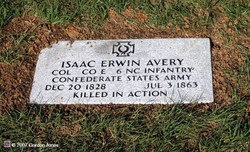 Colonel James William Carter is a little more elusive than the others. I have yet to find a photograph of the 33 year old colonel who arrived at Gettysburg in command of the 13th Mississippi Infantry. He was a pre-war planter. He saw action at First Manassas, the Seven Days battles when he would be wounded at Malvern Hill. He would see action again at Antietam and Fredericksburg. He would lead the 13th Mississippi Infantry into the fighting on the second day of Gettysburg under General William Barksdale and they would break through the Federal lines at the Peach Orchard on the southern part of the battlefield. Seven years after the Civil War ended, his remains were removed from Gettysburg and he rests today in Hollywood Cemetery, Richmond, Virginia which is considered the Arlington of the Confederacy. 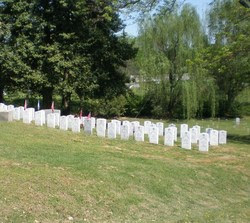 A small section of the Gettysburg dead in Hollywood Cemetery 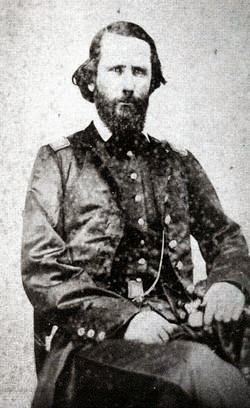 William Davie DeSaussure arrived at Gettysburg in command of the 15th South Carolina Infantry at the age of 43. He would be the oldest Confederate colonel to die there. He had graduated from the University of South Carolina and led an extremely busy life before the war. He'd been a lawyer, politician, fought in the Mexican War, and served in the U.S. Army until the Civil War began. He'd seen action at Antietam, Fredericksburg, and Chancellorsville. He came to Gettysburg leading the regiment in Joseph B. Kershaw's brigade. His regiment was in reserve during Kershaw's fight at the Peach Orchard, but he was soon sent to help Semmes's brigade in its assault on the Rose Farm to the south. He was leading his men forward when he was struck in the chest by a bullet and killed instantly. DeSaussure was known for his reckless courage. He rests today in the 1st Presbyterian Church Cemetery in Columbia, South Carolina. 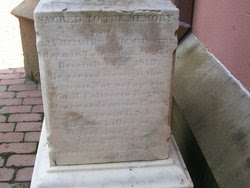 Grave of William DeSaussure against the wall of the church

John Abraham Jones arrived at Gettysburg at the age of 41 and commanding the 20th Georgia Infantry. He was nicknamed "Little Jack". Before the war he'd been a lawyer, politician, and fought in the Mexican War. His regiment was a part of Benning's brigade in John Bell Hood's division which assaulted the far south flank. This brigade saw action near the Devil's Den and Triangular Field at Gettysburg. After some Parrott Rifled cannons had been captured, the enemy opened fire with their artillery. A shell struck a rock, and a shell fragment glancing off the rock passed through Jones's head, killing him instantly. Benning said, "He behaved with great coolness and gallantry." Following the war, his remains were being sent back to Georgia when the ship sank and his body was lost at sea. 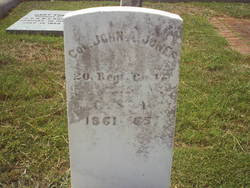 Trevanion Dudley Lewis arrived at Gettysburg in command of the 8th Louisiana Infantry at the age of 27. He saw action under Stonewall Jackson during the 1862 Shenandoah Valley Campaign. They fought during the Seven Days, 2nd Manassas, and he was wounded at Antietam. He was captured at Fredericksburg during the Chancellorsville Campaign. Exchanged, he would lead the regiment at Gettysburg. Considered a modest man, he would be in reserve as Hays's brigade attacked Cemetery Hill late on July 2. I have yet to find details on how he was killed, most of the fighting being after dark and Hays's report on the battle barely mentions him. Initially buried on the field, his remains probably rest today in Hollywood Cemetery, Richmond, Virginia.
Joseph Wasden came to Gettysburg in command of the 22nd Georgia Infantry and was 33 years old. He was a pre-war lawyer. He'd seen action during the Seven Days and been wounded at 2nd Manassas. He would charge Cemetery Ridge on July 2 along with the rest of Ambrose Wright's brigade. During the fateful charge, he was riddled by canister fire and killed. Federal Colonel Horatio Rogers of the 2nd Rhode Island found his body and noted that he had a Masonic certificate in his pocket decided to bury his brother with military honors. Following the war, his remains would be removed to Laurel Grove Cemetery in Savannah, Georgia where he rests today. It was said that the service contained no truer officer than Joseph Wasden. 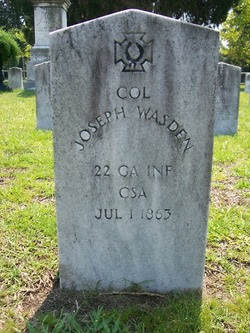 The colonels killed on day 3 at Gettysburg will be in the next blog.

The 19 Confederate Colonels of Gettysburg

I thought it amazing that Lee lost 5 general officers at Gettysburg. Recently, I've been doing a large amount of research for my upcoming Civil War website. To my amazement, there were 19 Confederate colonel's killed at Gettysburg. 10 of the 19 were killed on the third day in what became known as Pickett's Charge. No other Civil War battle comes close (the closest are Antietam and Spotsylvania with 9 each, added together they still don't equal Gettysburg). I thought I would to a blog or couple of blogs on these 19 men who died leading regiments and brigades at Gettysburg. 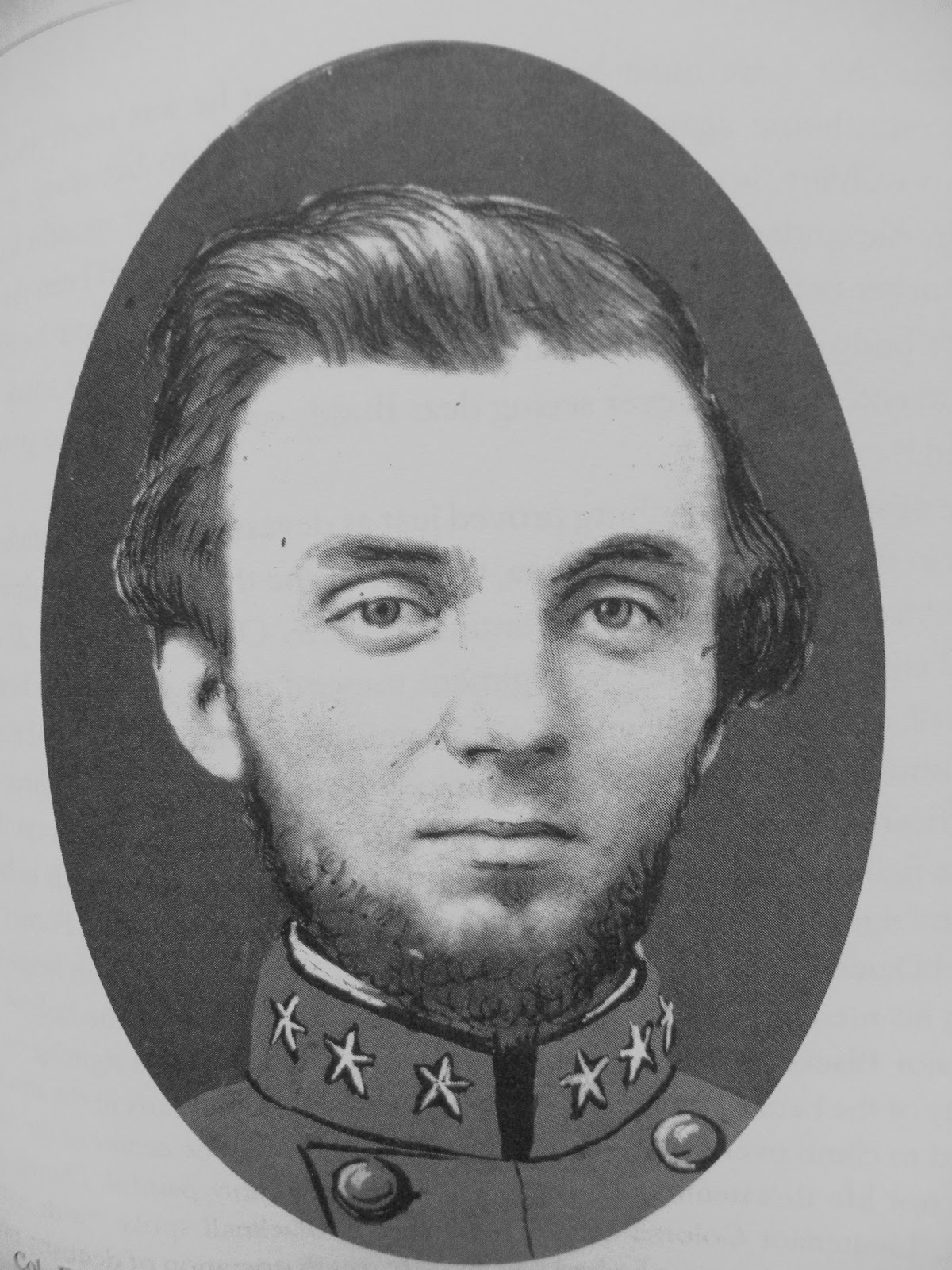 Daniel Harvey Christie arrived at Gettysburg in command of the 23rd North Carolina Infantry at the age of 30. He had been a pre-war music teacher, merchant, and had ran a military school. He'd seen action several times in the war before Gettysburg, having been wounded at Seven Pines when the horse he was riding was killed and fell on him. He'd seen action at Williamsburg, Seven Days,  Antietam, and Chancellorsville among others. During the Seven Days battles, he'd been wounded in the leg at Gaines' Mill. During Iverson's debacle on the first day of the Battle of Gettysburg, the regiment advanced with the rest of the 1400 men of Iverson's North Carolina Brigade. For the full story of what happened, please see my blog entitled Alfred Iverson: A General and His Burial Trench. During the charge that saw Iverson lose 900 of his 1400 men, Colonel Christie would be shot through both lungs. He would cling to life for 16 days, dying in Winchester, Virginia on July 17, 1863. It would have been a long and painful death. He rests there today in Mount Hebron Cemetery. 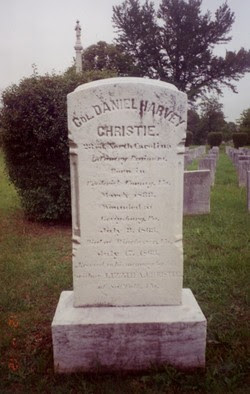 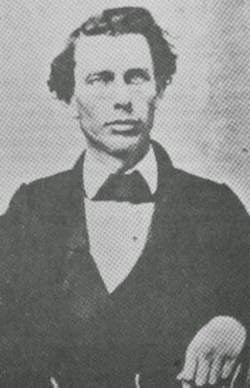 Samuel P. Lumpkin arrived at Gettysburg on July 1, 1863 at the age of 29. He'd been a physician before the war began and arrived at Gettysburg in command of the 44th Georgia Infantry. He led the regiment during the Seven Days battles and was wounded at Malvern Hill during the last of those battles. He then saw action at Antietam and Chancellorsville. His regiment was in the brigade of Brigadier General George Doles and saw action on the northwest side of town that afternoon. Doles's brigade was heavily engaged just west of Blocher's Knoll and Colonel Lumpkin was struck in the leg. He was being taken back to Virginia when he was captured during the retreat at Williamsport, Maryland. The Federal surgeons determined the leg must be amputated which was done, Colonel Lumpkin diedoon thereafter on September 11th in Hagerstown, Maryland. It was nearly two months following his being wounded.Samuel Lumpkin rests there today in Rosehill Cemetery. It was stated about Colonel Lumpkin that there was no braver, better, or cooler officer. 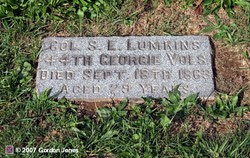 Henry King Burgwyn would be the youngest full colonel to die at Gettysburg. He arrived on the field that morning in command of the 26th North Carolina Infantry at the age of just 21. In his short life, he'd managed to graduate from both the University of North Carolina and the Virginia Military Institute. He was known as the "Boy Colonel." He was personally recommended for command by General Stonewall Jackson. He would see action at New Bern and Goldsboro Bridge. During heavy fighting against the famed Federal Iron Brigade, he was personally carrying his regiment's colors when he was shot through both lungs. He would be dead within two hours time. He was satisfied with his fate saying, "The Lord's will be done." He added, "Tell the general that my men never failed me at a single point." He rests today in Oakwood Cemetery, Raliegh, North Carolina. He was one of the bravest soldier's and extremely intelligent person. 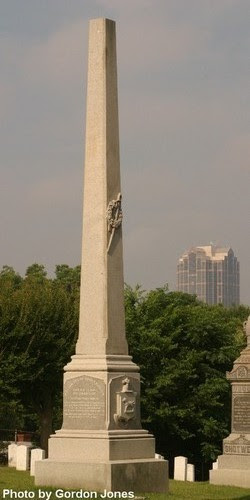 I will write about the 5 colonels who lost their lives on the second day of Gettysburg in the next blog.
Posted by Tim Kent at 7:56 PM No comments: