Alpheus Baker was born on 28 May, 1828 in Clover Hill, South Carolina. He became a school teacher at age sixteen and taught in South Carolina, Georgia, and eventually settled in Eufaula, Alabama.  At the age of twenty, he began reading law and soon became an attorney.
When the war began, Baker enlisted as a private and was quickly elected captain. Ordered to Fort Pillow, Tennessee on the Mississippi River, Baker was elected colonel of the 1st Alabama, Tennessee, and Mississippi Infantry. He was in the process of moving artillery from New Madrid, Missouri to Island No. 10 when the fort was surrendered. He was held prisoner from April, 1862 until September.
Upon his exchange, Baker’s regiment was reorganized as an all Alabama regiment and became the 54th Alabama Infantry. He saw action at Fort Pemberton during the Vicksburg Campaign and was severely wounded in the foot at Champions’ Hill. General Loring, his superior there, praised him for his bravery. 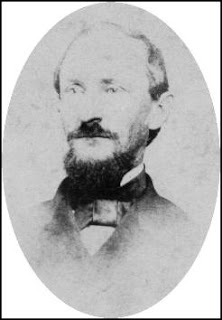 After his recovery, Baker was promoted to brigadier general on March 7, 1864. His brigade of four regiments, the 37th, 40th, 42nd, and 54th Alabama infantry were ordered to the Army of Tennessee in Georgia. He saw heavy action at Resaca and New Hope Church. At the Battle of Ezra Church, he was again praised by his immediate commander Major General Henry D. Clayton. His brigade had charged and lost almost half their men.
Although praised by his division commanders, it appears his corps commander Lieutenant General S.D. Lee was somewhat disappointed in Baker. He called the general “indecisive” and “lacking in energy.” Baker’s brigade was soon transferred to Mobile, Alabama saving them from the blood bath at Franklin. His last battle was at Bentonville, North Carolina where his brigade numbered only 350 men, yet they captured 204 Federal troops.
Following the war, Baker returned to his law practice. He was well known for his use of humor in the courtroom. Thirteen years after the war, he moved to Louisville, Kentucky and practiced law there. He died there in 1891 at the age of 63 and rests today in Cave Hill Cemetery. A space was left vacant at his request amid the Confederate POW’s buried there and he rests with those men today.

Braxton Bragg: Exactly what was that guy's problem? 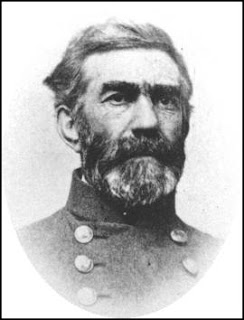 My old military history professor in college was a guy named Doctor Ikerman. He was the first to explain the difference in an art and a science when it comes to warfare. In science, you can repeat an experiment and it always has the same result. In art, you can get a different result each time. I still use some of his analogies when I give talks today. Historians have spent decades trying to understand the problem with Braxton Bragg's generalship. I think they too often become overly focused on his argumentative personality. While that is a big part of him becoming such a failure, that's not his greatest downfall. The man didn't understand that war was an art.
When he planned a battle, he planned it from A to Z. In other words, he figured he would make the first move, his enemy would react a certain way and Bragg would react to that in a sequence. He planned his battle all the way through. When his opponent didn't react as expected, it threw General Bragg into a quandary. An example is the quote Major General Breckinridge made in regard to Bragg's battle planning. He claimed that when Bragg was planning a battle, he would take no advice from his top subordinates, but when things went awry, he would accept the advice of a drummer boy.
Historians look at the Battle of Chickamauga and attempt to understand what Bragg was thinking. He'd won the battle, and was informed of the victory by several of his subordinates, yet he refused to believe he'd won. The main question here is why? Bragg had spent days attempting to cut Federal General Rosecrans off from Chattanooga and his base of supplies. On the night of September 18th, he went to bed thinking he'd finally gotten his army beyond Rosecrans's right flank. Rosecrans expected Bragg to do this very thing and during the night extended his left flank beyond the Confederate right. Bragg was surprised in the morning when his flank attack turned into a very costly frontal assault. 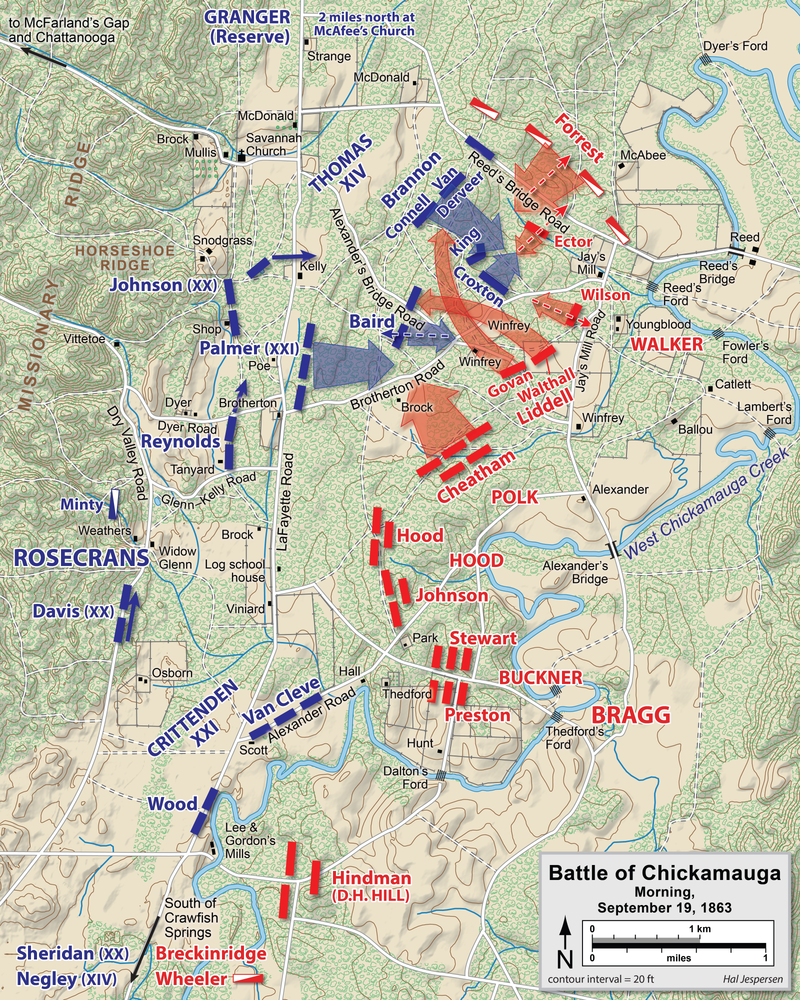 Bragg's frontal assault on the morning of September 19, 1863

When Rosecrans began to shift more troops from his right to the heavily engaged left, Bragg had an opportunity to strike these forces in the flank, but it went against how he had planned the battle and three of his divisions sat idly by as the opportunity was lost. Once the day was finished, he made another blunder. He changed the order of battle. To completely change the order of battle in the midst of a battle is just asking for mass confusion and that's exactly what he got. In most Confederate armies, a general was in command, lieutenant generals commanding corps' answered directly to the general. Bragg decided to mix matters up by having Lieutenant General D.H. Hill report to Lieutenant General Leonidas Polk who he made the right wing commander. He had Lieutenant General James Longstreet command the left wing and placed Major General John Bell Hood in command of Longstreet's Corps. Are you confused yet, because D.H. Hill and Leonidas Polk certainly were.
The blunders didn't end there. The next day, the frontal assault continued, Polk's right wing lost heavily. Luckily for Bragg's army, Rosecrans committed a blunder by creating a gap in front of Longstreet's left wing. Hood managed to attack at the right moment and break the Federal army. Once the Federal army began to retreat, Longstreet begged Bragg for reinforcements from the right wing to help him finish the enemy forces off. Bragg, far to the rear at his headquarters at Reed's Bridge refused to believe he'd won the battle. Without riding forward and observing for himself, he simply refused to send Longstreet any troops.
There is a comical story told about a Confederate private who'd been captured by the Federals and then escaped when their army retreated. He made his way to Bragg's headquarters and insisted on seeing the general in person. When he was brought into the presence of General Bragg, he told his commander that he'd won a great victory and that the Federal army was in full retreat. "How would you know what a retreat looks like?" snapped Bragg. "I should know," the ragged private replied, "I've been in your army almost two years."
Even Bedford Forrest was frustrated with Bragg asking what the man fought battles for anyway. Mary Chesnut said of Bragg when he laid siege to Chattanooga: "Bragg, thanks to Longstreet and Hood, won at Chickamauga. So we looked for results that would pay for our losses in battle, at least. Certainly, they would capture Rosecrans. No! There sits Bragg--a good dog howling on his hind legs before Chattanooga, a fortified town--and some Yankee Holdfast grinning at him from his impregnable heights. Waste of time. How? He always stops to quarrel with his generals."
That brings us to the second problem General Bragg had. He could never take the blame. At each failure or setback, his first reaction was to find someone to blame. When the repulse of Pickett's Charge occurred at Gettysburg, the first words out of General Lee's mouth was, "It's all my fault." As one historian once wrote, "Bragg would have choked on those words." I give two examples of great leaders. One is Robert E. Lee and the other is former Alabama football coach Paul "Bear" Bryant. Coach Bryant always took the blame for the losses and gave the players credit for the wins. Robert E. Lee praised his soldiers in victory and took the blame in defeat. Braxton Bragg wasn't capable of this at all. It was always someone else's fault.
At Shiloh, he blamed Randal Gibson and the Confederate soldiers. At Murfreesboro, it was General McCown and Cheatham. At Chickamauga, he blamed Polk, D.H. Hill, and Hindman. It was always someone else's fault. A leader like Lee had no problem motivating his men to fight. They knew he was there to accept fault for failures even when they weren't his fault. Bragg never!