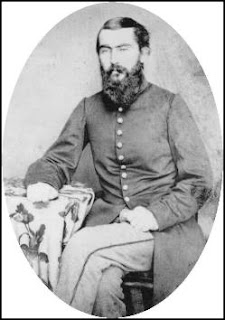 It wouldn't be a good story without a little bit of controversy. The same is true of Edward Dorr Tracy. He was born on November 5, 1833 in Macon, Georgia. He graduated from the University of Georgia and became a lawyer at just 17 years of age. He taught school for three years and then moved to Huntsville, Alabama in 1855. He practiced law there until the war began.
He raised a company that became a part of the 4th Alabama Infantry in early 1861. He had risen from Captain to major by the summer of 1861 and held that position at the Battle of Manassas, the first major battle of the war. Following the battle, he was appointed lieutenant colonel of the 19th Alabama Infantry which was commanded by Colonel Joseph Wheeler. He served in this position, becoming one of the few Confederate officers to have fought at First Manassas and the Battle of Shiloh. At the battle along the west bank of the Tennessee River, Tracy attacked the eastern flank of the Hornet's Nest and had a horse killed beneath him. During the action at Shiloh, he was noted for his bravery and coolness under fire. 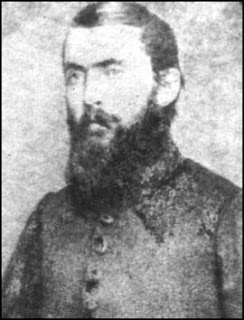 Another image of Edward Dorr Tracy

Soon after the Battle of Shiloh, Wheeler was promoted which resulted in Tracy becoming colonel of the 19th Alabama. He saw action around Corinth and was again praised for his gallantry. His brigade marched into Kentucky under the command of Edmund Kirby Smith who recommended Tracy for promotion to brigadier general. Although, Tracy saw limited action in Kentucky, Smith praised him for being "upright, intelligent, and accomplished." When the army returned to Tennessee, Tracy was promoted to brigadier general effective on August 16, 1862.
His brigade was soon sent to the defense of Vicksburg, Mississippi. There, his brigade was placed in a position to guard the southern part of town. Tracy was ordered to reinforce General Bowen's division south of town when Grant was found crossing the river below Vicksburg. He marched his 1500 men south, but was forced to stop and allow stragglers to catch up.
On the morning of May 1, 1863, Tracy was ordered south to intercept Grant. He was reduced to only three regiments which cost him a quarter of his fighting force. His position was attacked at 7 a.m. About an hour after the engagement began, General Tracy was shot through the chest and killed instantly. He was called a "brave and skillful officer, who fell where it is the soldier's pride to fall-at the post of duty and of danger." Bowen said that Tracy had shown his "signal proof of his ability as an officer and bravery as a man."
He rests today in Rose Hill Cemetery, Macon, Georgia. He was 29 years of age. So where does the controversy come from? 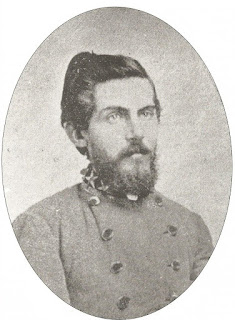 The above image is listed as three different Confederate officers

The above image has been credited as being that of Edward Dorr Tracy sometime before 1863 while he was still a colonel. There is a slight resemblance to the above photographs of Tracy, however the match is not perfect. The above photograph has been listed as that of Confederate Brigadier General James Green Martin of North Carolina. A Quick look at General Martin will quickly show you the above photo looks nothing like him. 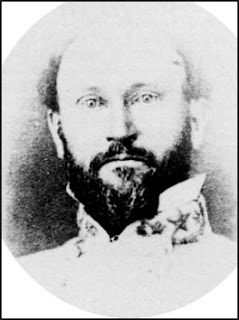 In the book More Generals In Gray by Bruce Allardice is photograph of a Confederate Colonel named John Donelson Martin. The photo is provided by a descendant of Colonel Martin. Colonel John D. Martin was born in Tennessee in 1830 and his father was a wealthy business man of Nashville, Tennessee. Colonel Martin fought in the Mexican War at the age of 16. Following that war, he became a doctor. He entered the war as a captain in the 154th Tennessee Infantry. He became colonel of the regiment by January of 1862. He fought at Belmont, Shiloh, Iuka, and was mortally wounded on the first day of the fighting at the Battle of Corinth. Colonel John Donelson Martin rests today in Elmwood Cemetery, Memphis, Tennessee. If the photograph below is that of John D. Martin as his descendants insist, then the photograph was taken between January of 1862 and October of 1862, between the time he served as a captain and the time he was killed in combat at the age of 32. Below is the photograph of John Donelson Martin. 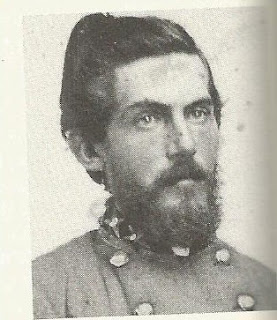