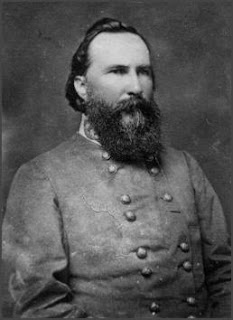 I'm often amazed at the many people who have come to refer to James Longstreet as one of the greatest defensive general's of the Civil War and how the South would have won the Battle of Gettysburg if Lee would have followed his advice. I blame the movie Gettysburg and the book The Killer Angels for starting this myth. I believe we could rewrite everything in history by putting it on the big screen. Before all the Longstreet fans become upset with me please allow me to finish.
In defense of Longstreet, he did not want to fight the battle at Gettysburg. He wanted Lee to move around the right and entrench between Meade's army and Washington, thus forcing Meade to make a disastrous frontal assault to try to save his capital. The problem that is so often overlooked is the fact that this is the exact move Meade was anticipating and watching for. He'd informed his cavalry to watch for signs of Lee attempting to move around his flanks. He'd set up an excellent defensive position on the heights behind Pipe Creek in Maryland. Meade didn't want to fight at Gettysburg any more than Longstreet did. He thought the position wasn't strong enough.
Another myth many believe is that Longstreet had no ambition to higher command. He did everything he possibly could to gain the command of the Army of Tennessee. He arrived at Chickamauga with his corps and joined Bragg's army against Federal General Rosecrans. Granted, Longstreet arrived in mid-battle, there is no controversy about him asking Bragg to move around Rosecrans flank. The battle was fought as another frontal assault and this just two months following the battle at Gettysburg. 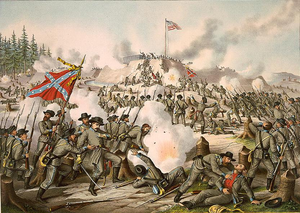 The Battle of Fort Sanders

Worse still, Longstreet moved his corps to Knoxville, Tennessee a month later and assaulted Fort Sanders which contained 440 Federal troops with 3,000 of his men. This assault was an utter failure. The battle cost him 813 casualties and only inflicted 13 on the enemy troops in the fort. Does this sound like the ultimate defensive commander?
Which brings me to the question of whether Longstreet would have been a better commander than Braxton Bragg. I read once where a historian had said that what made Lee such a great commander is his ability to take full responsibility when a battle was lost. The historian actually said, "Where Lee could say it was all his fault, Bragg would have choked on the words." I can add that Longstreet would have choked on the words also. After the battle at Knoxville, Longstreet did the same thing Bragg was famous for, he began arresting his subordinates. He arrested Major General Lafayette McLaws and Brigadier General Jerome Bonaparte Robertson for the disaster. Longstreet admitted after the war that he'd done McLaws an injustice.

Going a step farther about how movies affect history, one need only to look at the monument of Longstreet at Gettysburg. In the book These Honored Dead by Thomas Desjardin he refers to the problems with this monument. I'll just insert a quote from his book here. "Despite the work of historians that shows Longstreet was wearing an officers 'kepi' style hat during the battle, and wartime photos that show his long narrow beard, the solid metal image that future generations will see at Gettysburg is the image of...well...Tom Berenger, the actor who played Longstreet in the movie with a horribly false, wide beard and a hat reminiscent of a western cowboy." Because of the size of the man mounted on the horse, many Civil War buffs have nicknamed the monument 'The Troll on the Pony.'
I'm not here to bash Longstreet. I think he was a fine commander. All commanders make mistakes. Even Lee and Jackson made mistakes. I'm just saying Longstreet has been built up beyond what he truly was by the big screen and one of my favorite actors Tom Berenger.

Stovepipe: The Story of A Civil War Hero

I recently finished the book Thunder From A Clear Sky by Ray Mulesky. I ordered the book online and when it first arrived, I flipped through the pages and thought it looked dull. The saying that you can't judge a book by its cover proved true in this case. Once I started the book, I found I couldn't put it down. Adam Rankin Johnson is one of the best kept stories of the Civil War. I've read enough books on Nathan Bedford Forrest to burn a wet mule, but then I learn there was another Confederate Brigadier General just like him. A master at the game of bluff.
Mr. Mulesky does a great job telling the story of General Johnson who is the star of the book. Johnson was from Kentucky, but lived across the Ohio River from Newburgh, Indiana. Johnson often found himself in tight places only to bluff his way out. He once came upon some Federal soldiers against his three men and told them they were surrounded and would all be killed if they didn't surrender. They surrendered to Johnson and his three men.
He earned the nickname "Stovepipe" from the fact that when he and about twenty men raided Newburgh, Indiana, he used an old stovepipe mounted on wagon wheels to appear as if he had a cannon aimed at the town. As proved so often in the case of Stovepipe Johnson, the bluff worked. He took three men and double barreled shotguns and attacked an entire company of artillery during the night. By shifting positions, he made the company believe they were surrounded by several thousand men. His men fired on the Federals for ten minutes and disappeared, but the Federal soldiers returned fire for another four hours thinking they were about to all be captured.

Tragically, he was accidently shot in the head by one of his own troopers. He was said to have been blinded by the fire, but he wore some strange glasses until his death that suggests that he didn't totally lose his vision. Following the wounding he continued to serve until the end of the war. He was thirty years old at the close of the war. 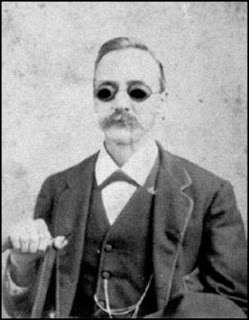 A postwar photograph of Stovepipe Johnson

Following the war, Johnson moved to Texas and led quite an active life for a disabled man. He founded a town, along with various other enterprises and died there in 1922. He rests today in the Texas State Cemetery in Austin, Texas.

The resting place of Stovepipe Johnson and his wife