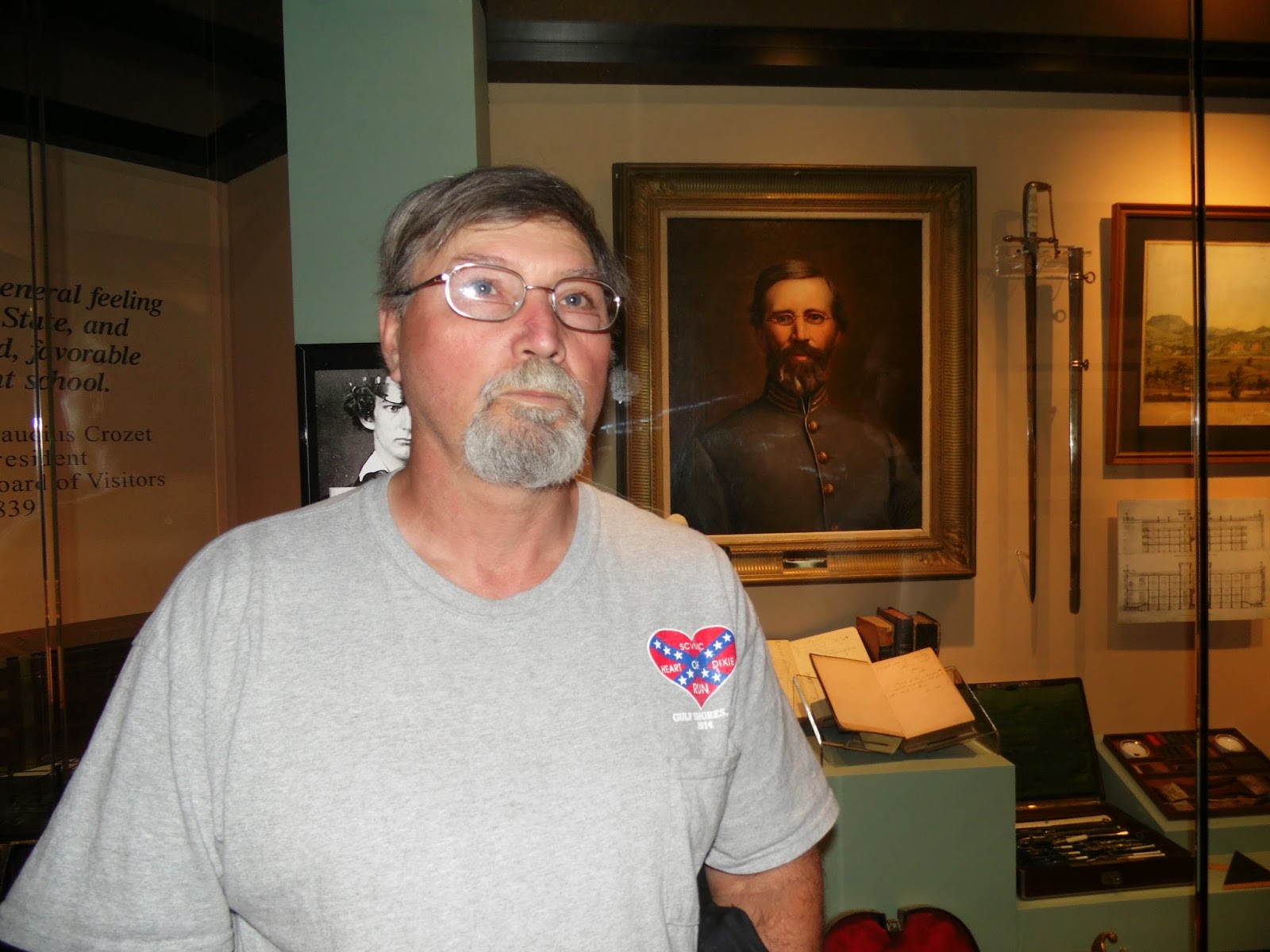 Lately, I've been giving my Virginia Civil Wargasm a lot of thought. That was a great trip and now I want to take Jerry, Mel, and my wife to Gettysburg. I've had the honor of visiting that battlefield twice. Like Franklin, Tennessee, it's one of my favorite fields. Although, the "what ifs" of that battle have been blown out of proportion, it's still fun for a Southerner to stand there and think of them.
By the way, my buddy Jerry Smith is now on facebook and probably needs some friends, especially if you're a "good ole rebel." Very few people know this, but I've also rewritten my very first book which I think was poorly written. The first time is always the toughest, and I believe I've gotten better as I go. I thought it would be cool to use an excerpt here from the book that actually happened to a great Confederate officer from Louisiana named Roberdeau Chatham Wheat. The following comes from my upcoming book entitled Like A Stonewall.

Major Roberdeau Wheat, commander of the Louisiana Tigers walked up, gave a half hearted salute and gave Evans a rough pat on the back. The man was a giant at six feet, four inches. He weighted two hundred and seventy-five pounds. Wheat was an imposing man. He had be be to control his troops. The Louisiana Tigers were composed of ex-cons, dock workers, and some of the roughest Irishmen in the country. It took a man like Wheat to instill discipline on a group of that nature. The entire regiment wore the colorful zouve uniforms made famous by the French army. The majority of them had shaved their heads except for a small spot in the back that they pig-tail.
His men were sunburned and muscular from hard labor on the docks of New Orleans. They were impressive looking men dressed in bright red shirts, blue and white striped baggy breeches, white gaiters, and the red fez. The fez was invented by Africans and adopted by the French while stationed in Morocco.
Wheat's tigers loved the attention they receive from all the women. One Richmond journal has labeled them the most dangerous soldiers to ever march to a field of battle. That remained to be seen. They carried brass knuckles and bowie knives. Two of their officers have already fought a duel with each other and three privates have died from accidents.
Evans figured he'd gotten command of the tigers because like them, he too was considered a bit rough around the edges. Evans liked Wheat. The man was quite jolly, never in a bad mood, always entertaining to be around. He seemed a bit immature for his thirty-five years. He's spent his life seeking adventure. Boredom was the one thing that would make Wheat sad. Wheat had  said he'd fought in the Mexican War for the pure pleasure of it. This war was just another adventure he'd embarked upon.
Just two years younger than Evans, he looked and acted a lot younger. Evans thought of him as a boy, a huge boy. Wheat had a round face with a thin dark mustache. He was heavy, but not fat. His fingers reminded Evans of fat round sausages. 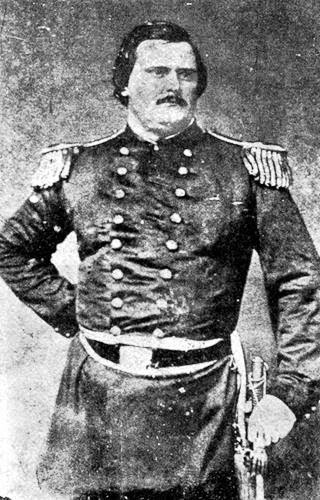 Excerpt from the next time we meet Wheat in the book:

“Take your tigers and charge the center of the Federal line,” Evans shouted as he pointed toward the Union position.
“You got it,” Wheat yelled back. He turned and gave orders for his battalion to move forward across the field into what every one of them knew was close quarters combat.
Evans watched the giant lead his men forward. They gave a yell as they began to charge. He watched them begin in the right direction, but they soon changed direction and moved toward the Federal artillery. It wasn't what he'd asked for. He couldn't believe his eyes. A large portion of his men threw down their weapons and charged with Bowie knives drawn. He watched them get within twenty-five yards of the enemy artillery pieces. Evans was in awe of his brave men who were fearless enough to charge enemy cannons with only knives drawn. Deep down, he knew they couldn't succeed. Men began to fall at every step from the combined artillery and infantry fire.
The most conspicuous figure among the group was Major Roberdeau Wheat. The gentle giant was in front of his men shouting and waving his sword. At that moment, something caught Evans eye. Another Federal regiment was coming onto the field already in line of battle. He watched them lower their muskets and open fire on Wheat's battalion. Just as quickly as Wheat's charge had begun, it was over. He saw the Louisiana Tigers disappear in a cloud of smoke. When the smoke cleared, many of the fancy dressed men were on the ground. The survivors were racing back toward Evans main line. Major Wheat lay on the ground with his men. 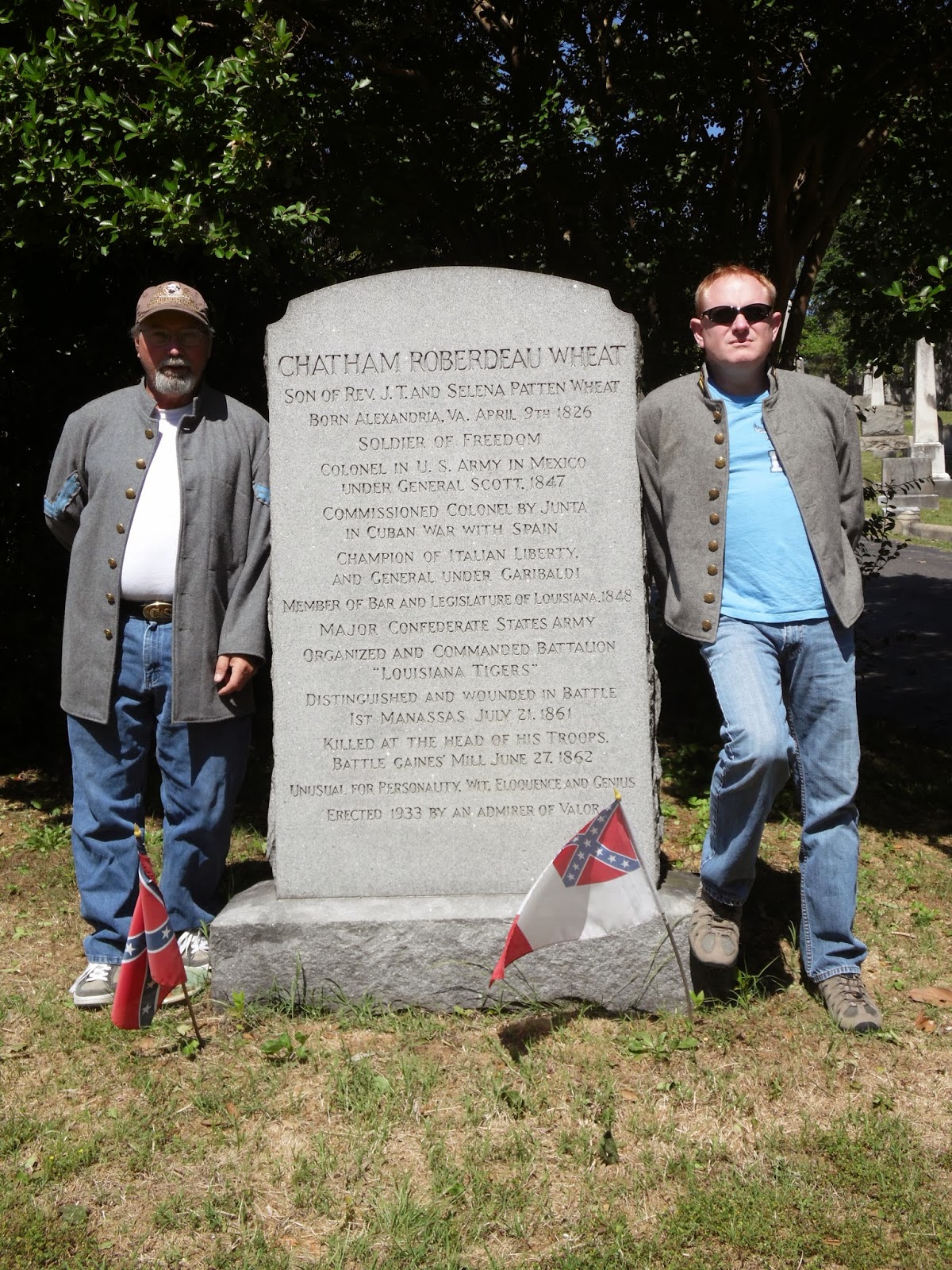 Jerry and I at the grave of Major Roberdeau Wheat in Hollywood Cemetery in Richmond, Virginia

Another excerpt for Wheat:

The bullet had struck Roberdeau Wheat below the armpit, traveled through both lungs and exited his side. Two men attempted to carry the huge man toward the rear, but it was useless. He just weighed too much. One of the men recruited two more men and they placed Wheat in a blanket. It was all four men could do to lift the giant off the ground, but they were determined to get him to a surgeon. They weren't about to allow their brave commander to fall into Federal hands.
Wheat coughed and blood ran down his clean shaven chin. They approached a split rail fence. Wheat gasped, “You may as well leave me here.”
“Not gonna do it, Sir.” One of the men mumbled as he strained with the great weight.
Another man nearby with a slight wound to his forearm moved over and said, “Better let me help.”
They eased the blanket on the ground. The five of them took his arms, legs, while the other supported his head. They struggled to get him over the fence. Once across they placed him back on the blanket and struggled down the gentle rise toward the stream. Once over the stream, the real struggle began. They would have to lug the man over another fence and up Henry Hill. About half way up the hill they eased the blanket to the ground and collapsed around him in exhaustion.

A Pre-War photograph of Major Wheat

As the surgeon began his inspection, Wheat coughed up more blood and asked, “How bad is it?”
The surgeon cut Wheat's shirt away and found the entry hole. He reached around on the other side and found where the bullet had exited his body. Shot through both lungs, the surgeon understood that Roberdeau Wheat had seen his last battle. There was just no way he could possibly survive such a wound. He frowned and said, “It's damned bad. I'm just gonna be honest with you. Your wound is mortal. You need to make your peace with God before it's too late.”
Wheat smiled. Well, I don't feel like dying just yet.”
The surgeon was surprised at the lightness of Wheat's mood at such ghastly news. He believed the major was just too afraid to face the truth. He said, “There is no case on record of anyone with such a wound having survived. I'm sorry, Major.”


Wheat attempted to laugh, but coughed up more blood. He said, “Then, Doc, I will put my case on record.”

You will also notice that it hasn't been to the editor yet. So does Wheat survive the tragic wound? Does he survive the war? I guess I could be ugly and make everyone wait on the book, but all you'd have to do is search Wikipedia. So here is the final excerpt pertaining to Roberdeau Wheat:

Major Chatham Roberdeau Wheat who had been told he couldn't possibly survive being shot through both lungs did indeed put his case on record. Sadly, he would return to his command and be killed during the Battle of Gaines’ Mill almost a year later at the age of 36. He rests today in Hollywood Cemetery, Richmond, Virginia, which is considered the Arlington of the Confederacy.