A Mini-Civil Wargasm With My Buddy Pat: Part II 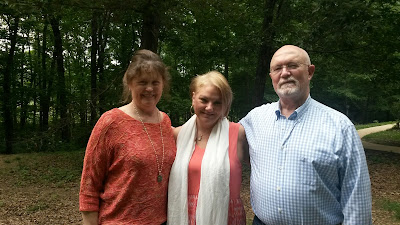 I went to church with Pat Sunday morning and on the way back to his house, he took me to a few places. I didn't expect much, a Confederate cemetery, and an old ironworks site. The cemetery was larger than I expected and kept extremely neat. These soldiers were brought to a house that still stands today (but privately owned) from Mississippi where they died of disease and wounds. Pat said he'd never been inside the house. I told him that I'd ask if they would show us around, but we arrived to find a fence around the property with a large iron gate. We figured they didn't want to show anyone around by the looks of things. 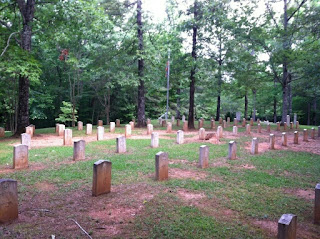 About half of the Confederate Cemetery

The next stop found us in Shelby, Alabama outside what appeared to be an old abandoned house. It was actually the Shelby Hotel and dated back to the war. Again, we wanted to go inside, but someone had a padlock on the door. The place has fallen into disrepair and it appears someone plans to let if fall apart. Pat said the last time he visited the site the windows were all intact. The glass is very old and its a shame someone is vandalizing the place. 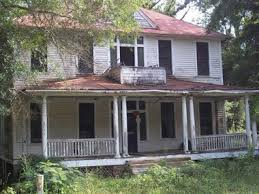 Next to the hotel is the old Shelby Ironworks site. There is a neat little park on the south side of the road, but across the road stands the ribs of one of the old furnaces. Someone had recently cleared the area with a bulldozer, so Pat and I prowled a good deal of the area. We found more ruins, but my biggest fear was chiggers. Since taking Doc Rick Price to Shy's Hill two years ago, I've had an extreme fear of chiggers. I was eaten alive. Pat promised me we were safe and luckily, almost two weeks later, not a bite. 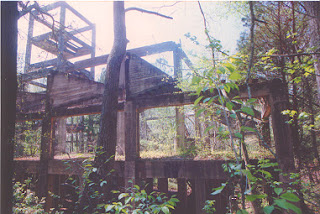 Remains of one of the furnaces

I got on Pat's nerves asking him a thousand questions regarding the area. He finally told me that I was asking him things he couldn't answer. The place was so neat and I was so excited that I wasn't thinking about how I sounded. Arriving home, I did a little research and learned just how large the ironworks site truly was. 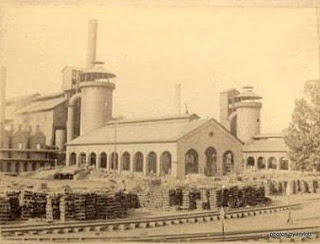 An old Photo of both furnaces 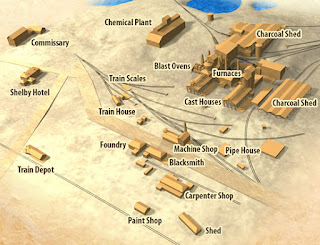 A map of the entire area showing the Shelby Hotel, furnaces, and rail lines

Overall, the trip was a blast and I'm already looking forward to the next one. I told Pat next time I'll take him down to Columbus, Georgia to the Civil War Naval Museum. We may even head on down to Andersonville, another place I've never mentioned if he would like.