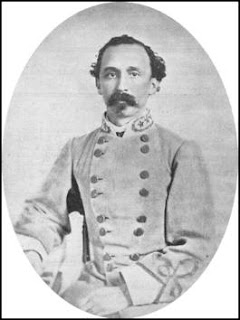 One of my favorite Confederate General's is Lawrence Sullivan Ross. "Sul" as he was called was an aggressive commander of Texas cavalry. Sul Ross was born in Iowa in 1838, but his family migrated to Texas before he turned a year old. Although, he began his college studies at Baylor University, he would earn his degree from Wesleyan University in Florence, Alabama. Wesleyan University was in what is today called Wesleyan Hall on the campus of the University of North Alabama or UNA.

Sul earned his degree in 1859 in Florence, Alabama. The year before graduation, Ross returned to Texas to help put down hostile Comanche raids on Texas settlements. His father was the Indian Agent. Sul Ross served as a captain on the expedition and was wounded by an arrow to the shoulder. He was then shot in the chest by a .58 caliber bullet. As he lie, temporarily paralyzed, the warrior who shot him, dismounted and approached him with a knife. A fellow soldier killed the warrior as he bent over Sul in a scalping attempt.
The wounds were so severe, it was believed he would soon die. Ross lay where he had fallen for five days unable to be moved. He begged those tending his wounds to just kill him and put him out of his misery. After five days, he was carried ninety miles to a post. The wounds became infected and Ross suffered throughout 1858 with health issues.
Following graduation from Wesleyan Hall, he became a Texas Ranger and served in that capacity until Texas seceded. Ross married Elizabeth Tinsely in 1861 and became major of the 6th Texas Cavalry. He led a successful raid on a Union supply train at Keetsville, Missouri and his commanding officer said of him, "but a boy, he has earned imperishable honors as an officer."
The command soon moved east of the Mississippi River and Sul was promoted to colonel of the 6th Texas Cavalry. At the Battle of Corinth, he was extremely sick with a fever and he found the heat excruciating. Despite his ailments, he refused to leave the field and fought as the rearguard during the retreat and his actions at Davis Bridge earned him a much deserved promotion to brigadier general. His promotion though was delayed by jealous officers and not received until 1864 to date from December 21, 1863.
From September of 1863 until April of 1864, Sul Ross suffered from the effects of malaria, but never asked for a furlough and faithfully continued to serve. Following this bout with disease, he would suffer respiratory problems for the remainder of his life. His brigade fought in Mississippi through the spring of 1864 and then was sent to Joseph Johnston's Army of the Tennessee at the beginning of the Atlanta Campaign.
When Hood moved his army into Northern Alabama, Ross's Texas brigade reported to Nathan Bedford Forrest. His brigade would lead the advance into Tennessee and play an important part as rearguard during the retreat from Nashville. During the spring of 1865, his brigade would again serve in Mississippi.
He would have a busy life following the war. Back in Texas, he began his post-war career as a farmer. He would then become sheriff, Texas State Senator, and eventually governor of Texas where he served two terms. Sul then became president of Texas AMC (which would later become Texas A&M). 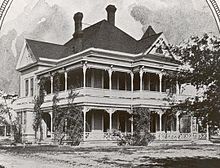 He went on a hunting trip with his son and several friends and became sick with chills and stomach problems. He returned to College Station just in time to die on January 3, 1898. Some speculate he died of a heart attack, while others say it was from exposure during the hunt, or "acute congestion of the stomach and bowels." Regardless of the cause, Sul Ross was 59 years old. He rests today in Oakwood Cemetery in Waco, Texas. 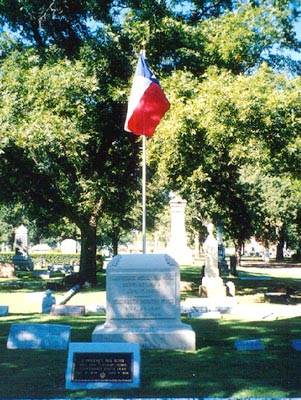 Sul Ross's bravery was well known both before and during the Civil War. A Southern newspaper correspondent best summed up Ross's brigade by saying when they attack, "something must give way, and somebody is sure to get hurt." He was often called chivalrous, gallant, and even a daring knight. It was said he had the heart of a true soldier. Women considered him a handsome young officer.

Legend says that Ross as president of the University would often tutor students before an exam. He would refuse pay, but only accept a penny for their thoughts. Today, at exam time, students place pennies on the statue above.

Pennies on the statue at exam time 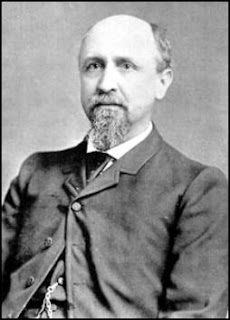