Among the many Confederate generals I admire, one of my favorites is Brigadier General William Edmundson Jones who earned the nickname "Grumble." William Jones was born in Washington County, Virginia in 1824. He graduated from West Point ranked 10th out of 38 members of the class of 1848. His ranking in conduct wasn't nearly so high.
Following graduation, William served in the old army without seeing any combat. In 1852, he was granted a furlough, returned home to Virginia and married Eliza Dunn. As they were traveling back to his post on the west coast, they boarded a ship in New Orleans. The boat sank off the coast of Texas. William attempted to save Eliza but she was swept from his arms and drowned. Following her death one man noted that Jones seemed to take pleasure in pain as if he was doing penance for something he had done wrong. Perhaps he blamed himself for his wife's death. Still grieving and tired of the boredom of a peace time army, Jones resigned his commission in 1857 and settled down to his plantation in Virginia.

Jones while still serving in the U.S. Army sometime before 1857

He led Company D, 1st Virginia Cavalry at the Battle of Manassas as a captain. When the regiment's commander J.E.B. Stuart was promoted to brigadier general, William was promoted to colonel. The troopers of the 1st Virginia didn't like William as well as they had J.E.B. Stuart. Thus would start a bitter hatred between Jones and Stuart that would last until the two officers deaths. During the regimental election in 1862, the 1st Virginia Cavalry would vote William out as commander. He would then take over the 7th Virginia Cavalry. The units he worked with were lose in discipline, but Jones soon whipped them into effective soldiers.
Jones would dress as his men. One man wrote that he wore an old homespun suit, wore a yellow hat that matched his old yellow mare. He wore no insignia of his rank. One soldier said he looked like a tramp on horseback. His men didn't love him because of the discipline he instilled, but they did respect him. He had earned the nickname "Grumble" because of his irritable disposition and the loss of his wife had made him even more irascible. Though he was a close friend to Stonewall Jackson, there were few others he befriended. J.E.B. Stuart's staff officers took the brunt of his rage.
Because of his actions in battle at Cedar Mountain, Stonewall Jackson insisted Jones be promoted to brigadier general. His men also learned that Grumble was a good commander in combat and he gained more respect. In late 1862, Stuart complained to General Lee about Jones and attempted to have him replaced. He claimed that in all his dealings with Jones, he found the man defiant and insubordinate.
He led a raid in early 1863 that was a total failure, but rebounded to go on a spring raid with  his and Brigadier General John D. Imboden's brigade which saw success. Imboden said Grumble was a hard fighter, brave as a lion, but he was a man of high temper, morose and fretful.
Jones continued to lead his men until June of 1864. There at the Battle of Piedmont his small force faced over 12,000 Federal troops. The numbers in Jones's command have been reported from 2000 to 5000 men. During the fight, Jones was shot in the head and killed. His small force was then severely defeated. His body was carried back to Glade Spring, Virginia and buried next to that of his wife.

The marker near the spot where Grumble was killed 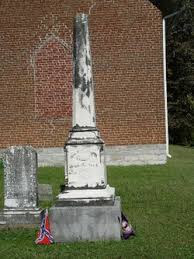