Railroad Accidents in Mississippi and One in Massachusetts 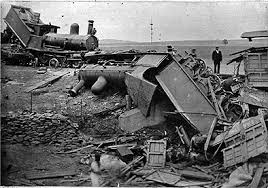 I've recently been researching a couple of train crashes in Mississippi near Corinth. One resulted in the death of two train crews in 1887 and the other in a collision in 1940. I've found very little information online, but have found lots of other interesting info. The following accidents will give you an idea of how dangerous the railroad used to be and still can be.

1940- H. B. COLE, Canton, MS, for many years a resident of Quitman, fatally injured in a head-on traffice collision five miles west of Canton last Friday. He died in a Canton hospital Friday afternoon.

1940- Josh SCARBROUGH, colored, about 34, killed by the Mobile and Ohio northbound freight train Monday afternoon. Accident occurred in northern part of Quitman and it is reported that SCARBROUGH was attempting to board the train and in some way missed his footing. His head and both arms were severed from his body.

1853- Franklin Pierce served as 14th President of the United States from March 4, 1853, to March 4, 1857. He began his presidency in mourning. Two months before, on January 6, 1853, the President-elect's family had been trapped in a train from Boston when their car derailed and rolled down an embankment near Andover, Massachusetts. Pierce and his wife survived but saw their last son, 11-year-old Benjamin, crushed to death. Jane Pierce viewed the train accident as a divine punishment for her husband's pursuit and acceptance of high office.

These are just a few of what I have found, but I haven't given up on obtaining the accident reports from the other two incidents.
Posted by Tim Kent at 6:29 PM